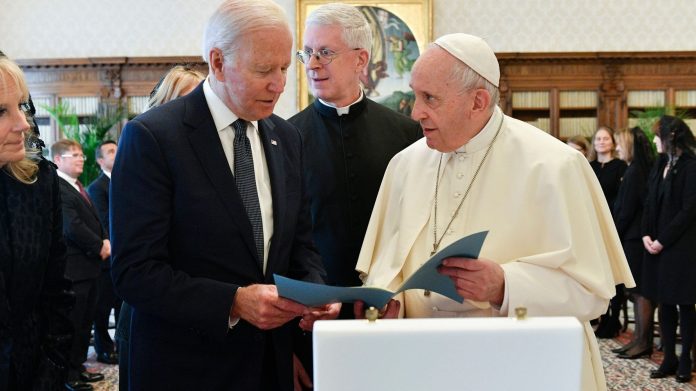 On 29th October, Friday, Pope Francis and President Biden renewed the close relationship between the two. The meeting lasted for 90 minutes and was double the length of the President’s meeting with Pope John Paul II when he was pontiff.

Pope Francis Share A Healthy Relationship With The Catholic President

This was Biden’s first time visiting the Vatican after 2016. Back then, Biden was recovering from losing Beau, his son, to cancer just a year before. The 2016 visit was because of the Third International Regenerative Medicine Conference. There, Biden had also passionately called for finding new cures for cancer.

However, Biden also remembered a kind moment regarding Pope Francis, his host. Pope Francis had visited the US shortly after Beau’s passing and had met with the extended family of Biden when he left the US from the International Airport at Philadelphia. Biden had started his 2016 speech by stating the event and praying that all would be able to receive the Pope’s presence, prayers, and words.

On Friday, President Biden and Jill Biden, the first lady, visited the Vatican once more to meet Pope Francis – someone who has given ideological inspiration and familial comfort to the President. Biden’s faith has long been an undercurrent in his private and public lives.

The vehicle of the President arrived at the Vatican’s interior courtyard at about 12 PM local time. Monsignor Leonardo Sapienza, the Papal Household’s head. Along with other officials from the Vatican greeted the President and his wife. As Biden made his way while shaking hands, he was repeatedly heard saying that it felt good after coming back.

Rachel Wood’s Documentary Will Talk About Her Being Groomed, Abused, and Mistreated

In This 2022 World Series, How Should Astros And Phillies Make Their Game Plan...

American Airlines Group (AAL) exchanged 9903925 shares on hands in most recent trading session and observed an average volume with -0.0028K...

Aurora Cannabis (ACB) traded 5597658 shares on hands in most recent trading session and observed an average volume with 0K shares....