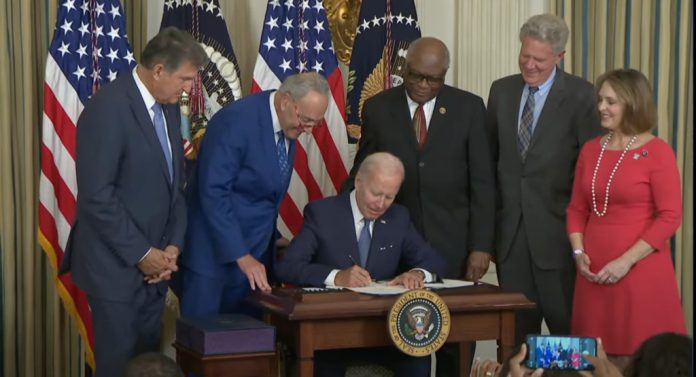 President Joe Biden signed the Inflation Reduction Act into law on August 16 which aims to address climate change, cut the cost of prescription drugs, raise corporate taxes in certain sectors and bring down the deficit. The minimum tax paid on profits amassed by the biggest corporations has come under the scanner.

President Biden was all praise for the legislation at the signing ceremony, which took place in the White House Dining Room. He said that the Inflation Reduction Act has won the hearts of Americans and special interest groups have lost out.

Biden said that his administration began even as America was going through dark times. He cited joblessness, the threats to the democratic process, and the COVID-19 pandemic. But he asserted that the government has not wavered and never considered giving in. instead they have succeeded in delivering results.

The lower house approved the Inflation Reduction Act with a 220-207 majority. It comes days following the passing of the bill by the Senate along party lines, with VP Kamala Harris casting the tie-breaking vote.

The Inflation Reduction Act has proved to be the most fruitful of the legislative efforts in this session of Congress by the Democrats. The bill is a revised version of the Build Back Better Act that was more ambitious in scope with a $2 trillion spending budget.

But it got stalled after moderate Democratic senators Joe Manchin and Kyrsten Sinema opposed it following weeks of hectic negotiations. The Inflation Reduction Act is way smaller at $370 billion.

How Useful and Accurate is 23 and Me Genetic Testing?

Immigration Bill By Democrats Introduce A Pathway To Citizenship

Is this stock is Attractive? Kalera Public Limited Company (KAL)

Are You Looking For Active Stock? The Singing Machine Company, (MICS)

The Singing Machine Company, (MICS) exchanged 238304 shares on hands in most recent trading session and observed an average volume with...