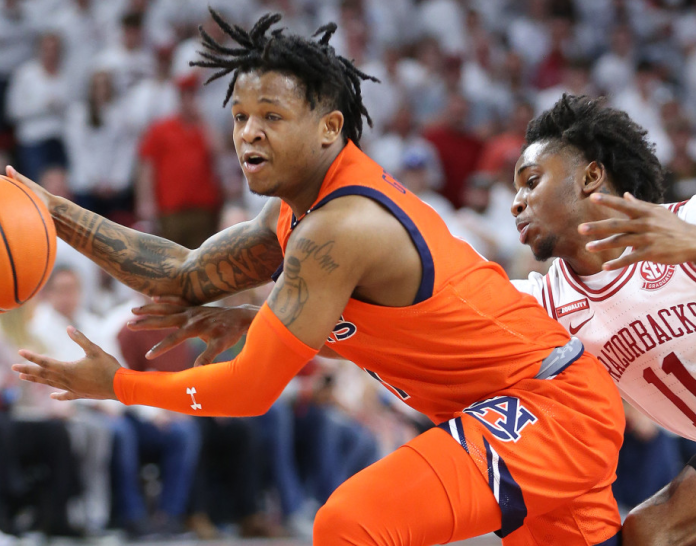 With 2:39 left, JD Notae with 28 points, 3 steals, and 4 blocks, and Jaylin Williams with 13 points plus 11 rebounds, made 7 free throws and gave the Hogs a lead that they never relinquished.

Auburn Tigers Still Have An 11-2 Record Over The Razorbacks

This win was merely the 2nd time that the Razorbacks have even beaten the Tigers, the No. 1 team. With this victory, the Razorbacks move to a 2-11 record in these games. It also is the 3rd time that a No. 1 opponent come to Fayetteville and also the 1st time that they played in the Bud Walton.

Starting from that stage, Williams made a couple of free throws, Notae also had the same numbers while Williams finished his 7-0 runs with 3 free throws that put the Razorbacks up 6, to take it up to 76-70.

Auburn Tigers fought back with 3-pointers to bring down the deficit and take the score to 76-73. With 2 free throws Lykes, Smith scored another 3-pointer to take the Auburn Tigers to within two even as 19 seconds remained.

Note was fouled even as 12 seconds remained giving a 4-point lead from the Razorbacks. Tigers missed a jumper and the rebound went to Williams, and it was all over.

The Hogs take the road to face Alabama this Saturday.