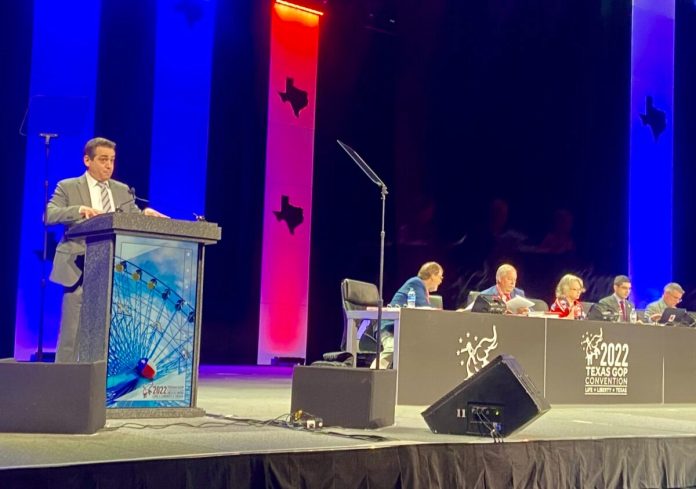 Over the weekend, the Texas GOP officially rejected the results of the 2020 presidential election, adopting a resolution in its platform that wrongly blames President Joe Biden’s victory over former President Donald Trump on election fraud in five critical states. Mr. Biden is referred to in the resolution as the “acting” president.

The resolution states they reject the official results of the 2020 Presidential election and assets that acting President Joseph Robinette Biden Jr. was not properly elected by the people of the United States.  It alleges that the elections in five states were illegal because different secretaries of state illegally evaded their state legislatures in conducting their elections in multiple ways, including by permitting ballots to be received after November 3, 2020.

The outcome of any state’s election was not changed by recounts or reviews of vote tallies. Officials, including Attorney General William Barr of Trump’s administration, have repeatedly dismissed charges of massive election fraud. After Mr. Biden was pronounced the winner, the former president and his allies pursued dozens of futile legal battles, including numerous Supreme Court challenges, in an attempt to give Mr. Trump a second term in the White House.

Despite this, Mr. Trump continues to make baseless accusations about election fraud. A House select committee examining the Jan. 6 attack on the Capitol and associated efforts to overturn the 2020 election is presently probing his activities.

Texas GOP also passed a slew of far-right resolutions on abortion rights, sex education, sexual health, or sexual choice or identity in any public school in any grade, and referred to homosexuality as an unhealthy way of life. Obergefell v. Hodges, a 2015 Supreme Court decision that legalized same-sex marriage across the US, is also being challenged on the platform. The state’s own Republican Senator John Cornyn was chastised for his work on the bipartisan gun package that is currently being negotiated by convention delegates. Cornyn was booed loudly when he spoke to the convention.

Texas preserves the right to secede from the United States, according to the Texas GOP. Another resolution called for a referendum in the general election of 2023 for the people of Texas to determine whether or not the State of Texas should reassert its identity as an independent nation.  Another advocated for the United States’ withdrawal from the UN.

While the platform supports the Second Amendment, it also advocates for the repeal of other amendments. The Texas GOP resolution includes a proposal to remove the 17th Amendment, which permits individuals to elect senators rather than having them appointed by state governments. Another proposes abolishing the federal income tax, which was established by the Sixteenth Amendment. Amendments to the Constitution must be proposed by two-thirds of each chamber of Congress, or two-thirds of states, and ratified by three-fourths of state legislatures.

5 Software Secrets Behind Every Successful Business

PEP Would Be Announcing Their Earnings Next Thursday

You Need to Know this stock? Healthcare Triangle, (HCTI)

Healthcare Triangle, (HCTI) exchanged 23661290 shares on hands in most recent trading session and observed an average volume with 475.54K shares....

Mullen Automotive, (MULN) exchanged 102353512 shares on hands in most recent trading session and observed an average volume with 87555.24K shares....

Clovis Oncology, (CLVS) acknowledged active focus on shares in the last trading session.The stock disclosed a change of 38.98% and its...

VOLATILITY ANALYSIS: Volatility remained at 3.82% over last week and shows 3.02% volatility in last month. Market risk that established with...