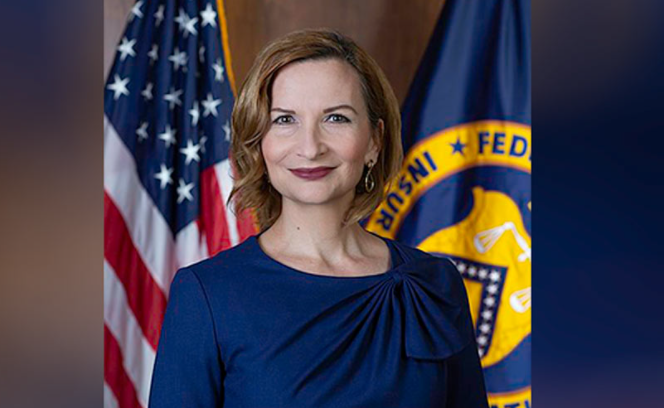 The Federal Deposit Insurance Corporation chairman, Jelena McWilliams, among the top banking officials in the US resigned following frequent clashes with Democrats. She branded it as a hostile takeover.

Jelena McWilliams came into the FDIC in 2018 and was a candidate of then-President Trump for a 5-year term at the helm of the autonomous regulatory agency. She faced a hostile Democratic setup and had repeated differences with colleagues over impending amendments in banking regulations.

Jelena McWilliams stated that she would be quitting on February 4, 2022. The move will certainly give the Democratic establishment more say over the FDIC. It will also give the administration more flexibility to aggressively look into bank mergers while also inculcating the risk of looming climate change in this industry.

Martin Gruenberg, an Obama appointee to the board will take over temporary charge as chairman in his third spell. The Democrats now have a majority of hold on the board.

The difference between Jelena McWilliams and the Democratic members on the board became more marked recently. Rohit Chopra, a board member and also the Consumer Financial Protection Bureau director had accused the leadership of unsound and unsafe governance. He chafed about the unwillingness of McWilliams to consider changes proposed by the majority of the board members.

Chopra wrote that while there might be differences among members on what policies could be enacted, there was a need to solicit public inputs to consider other options. He did not directly name Jelena McWilliams, the only Republican member of the board. She had disagreed and blocked the review, causing Chopra to call it an attack on well-defined and established laws.

McWilliams hit back in an article in a leading journal stating that Rohit Chopra had contravened rules and said that the members had attempted to push through the review, taking advantage of her brief absence while on a long-haul flight.

McWilliams said that she had always guaranteed that the members of the board had ready access to a team for briefings, technical expertise, and discussions. She said that her colleague intended to overthrow her and not advance merger regulations.

In her letter announcing her parting, McWilliams detailed the swift action she took to provide flexibility and maintain stability for the consumers and banks as they came to terms with the pandemic. She said that the financial system braved the storm and proved to be a pillar of strength for the national economy.