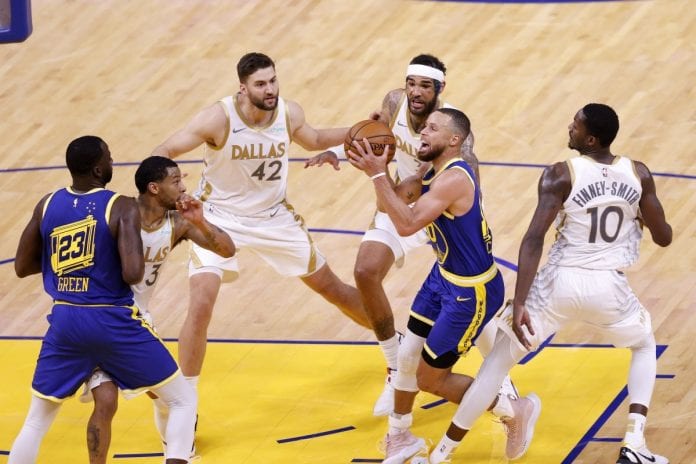 Before the match on Tuesday, 10th seed Golden State Warriors were within three games of the 6th seed Dallas Mavericks. As such, a victory for the Warrior would have made the gap two while the tiebreaker would have gone their way.

It Was Not To Be For The Warriors

Instead, the Mavericks managed to roast Golden State 133-102 and activate an effective swing of three games. The win increases the lead that the Mavericks hold over the Warriors to four loss-column games. This also marks an end to the tiebreaker with a 2-1 advantage for the season series. As such, the gap in the standings is effectively five games. This makes it almost impossible for the Warriors to climb into the first six.

For Dallas, the win does not guarantee a finish in the top-six either. However, it makes them stay afloat of the tournament for play-in for one day more, at least. A loss would have seen them fall to 7th on the table.

The victory also means that the gap between Dallas and the Lakers is now down to two games. As such, the incentive is strong for Dallas to wrangle in the Lakers. The 5th rank could ensure a meeting with Nuggets in 4th place who do not have Jamal Murray. It would be a more preferable match-up than the 3rd place Clippers.

Luka Doncic put in an excellent performance on the night, scoring 39 points for the Mavericks, along with six rebounds and eight assists. Dallas took control of the starting half in a scoring run of 28-0. The Warriors were held to only 12 points in the first quarter and 29 for the first half. The lead had extended to 43 points by the last quarter.

The result might not be the worst thing for Warriors. However, the lead to 11th seed Pelicans is now just three loss-column games, and they have three games against each other remaining.

SE Cupp: We are possibly living in the stupidest of times

Are The New Stimulus Checks Causing Inflation Rates To Go Up?