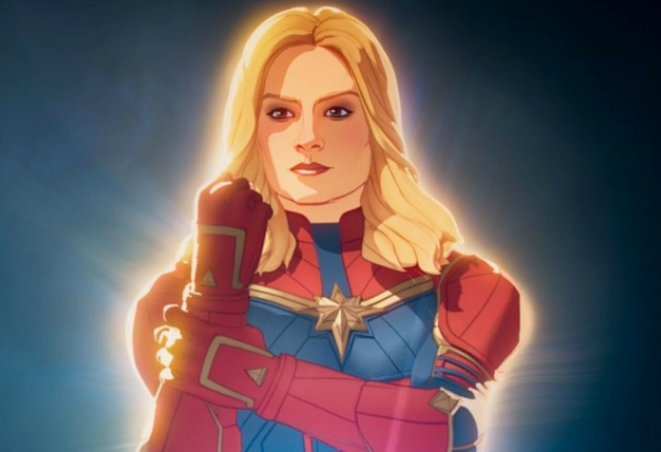 A handful of characters from Marvel’s “What If…?” were recast with new actors and actresses for the television show, which included Brie Larson.

The New Captain Marvel has spoken about her experience working on “What If…?”.

The show’s narrator is The Watcher, voiced by Jeffrey Wright. He brings alternate versions of characters from alternate universes into the MCU, based on the Marvel Comics series of the same name.

This show seems like a spinoff to Michael Waldron and Kate Herron’s Loki, the animated series delivered a massive cast of returning actors experiencing different timelines within the Multiverse. While characters like Scott Lang (Paul Rudd), Winter Soldier (Sebastian Stan), Thor (Chris Hemsworth), and Doctor Strange (Benedict Cumberbatch) returned, there were some interesting replacements within the cast.

This was not surprising as Evans and Downey Jr had wrapped up their contracts with marvel. Characters like Drax the Destroyer and Carol Danvers AKA Captain Marvel were also replaced with new actors.

What If…? Choose Alexandra Daniels Over Brie Larson For Captain Marvel

Alexandra Daniels sat down with a friend Lilah on Twitch and spoke about Captain Marvel. The actress revealed what it was like to work for Disney, the voice recording process, and the secrecy that comes with anything Marvel Studios.

The What If…? star, at first, thought that she would be an uncredited performer in the animated series and that her agents told her to hold off from sharing anything. It was her first voice job ever. She thought that she won’t get any credits and would just be a double for Brie Larson. When the first episode came out, the agents told her that she could not talk about it or do anything, till they can make the choice, whether to choose her or go with Brie Larson.

While Daniels was only given five minutes of prep in the first instance, she talks about how encouraging the director, Bryan Andrews, was during the process in What If. He was giving the actress cues and the freedom to explore the character. Captain Marvel appeared mainly in the episode where Hemsworth’s Party Thor became out of control, leading the storyline to a showdown of the immense heroes in this alternate universe.