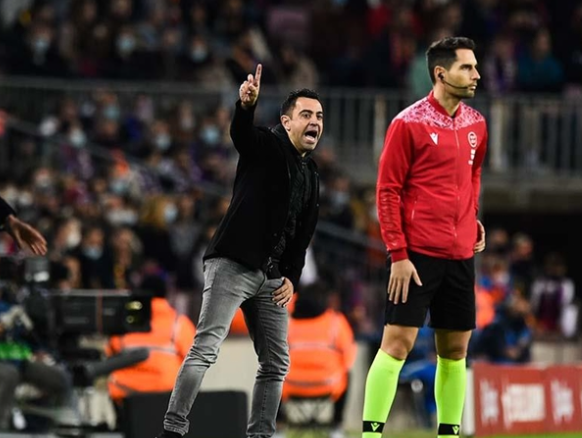 The Xavi Era in Barcelona has begun with a win, but it was far from being easy.

After a great first half, Barcelona took a one-goal lead early in the second, but their rivals stepped up their game and created several giant chances to come away with at least one point. Barcelona somehow survived and won all 3 points to finish the night in 6th place in the La Liga table, and Xavi saw some very good things from his first game in charge.

The first 30 minutes were better than anyone could have hoped for. Barca was absolutely exceptional in the opening half-hour, with a level of intensity on both sides of the ball that people had not seen in a really long time.

Without the ball, they pressed high and did not allow Espanyol a second to breathe and try to put together long passing sequences, and they continued to win the ball back high up the pitch in dangerous positions. With the ball, they passed it quickly and with purpose, with very little sideways passing and a good variety between short and long passes with players making several runs in behind the defense and great movement in the final third.

The Xavi Era: Barcelona Are Playing Better Than That Was Expected

Barcelona started the second half with a goal: after a great pass from Gavi, Memphis Depay was brought down inside the box by Cabrera and buried the penalty to give Barça a deserved lead.

The Blaugrana continued to attack and keep possession looking for more goals, but Espanyol responded very well to going behind and made it a very tough game.

The Xavi Era starts with a win and a brilliant first half, but the second period made it clear the new coach has a lot of work to do to make this team a consistent force. But the three points are huge for Barcelona.

Drake Spotted At A Private Date

PFE Has Been Given A Rating Of Neutral By Brokerage Firms