Home Entertainment When We Were Young festival 2022: Fans To Re-live Their Emo Phase 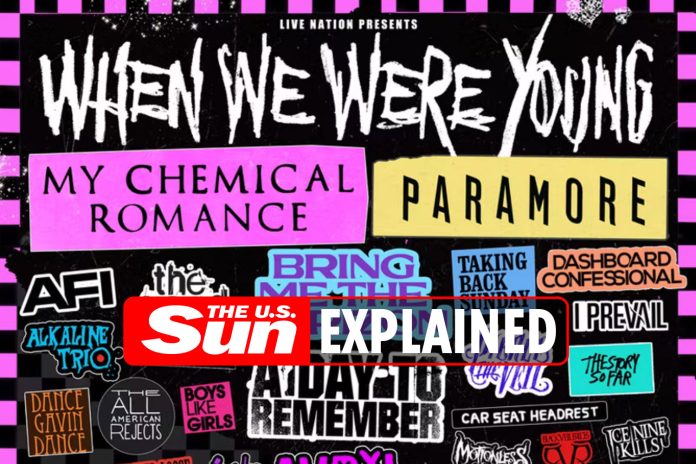 Just when you thought festival and tour announcements might slow down, Live Nation’s new When We Were Young festival pulls us back in. The event will take place on October 22, 2022, in Las Vegas, Nevada. It will include over sixty of the most popular emo and alternative rock groups from the last two decades.

Music enthusiasts are responding to the announcement that a new event featuring major emo acts would take place this October. When We Were Young, a Live Nation-produced event, will take place on October 22 at the Las Vegas Festival Grounds.

Headliners Paramore and My Chemical Romance are among the artists revealed, as are Jimmy Eat World, Avril Lavigne, Car Seat Headrest, The All American Rejects, Taking Back Sunday, and Alkaline Trio.

In 2017, a similar event with the same name was hosted in Santa Ana, California, with a lineup that included Morrissey, Cage the Elephant, and Taking Back Sunday.

Some voiced concern that the lineup was too good to be true, worrying it would be “another Fyre Festival.”

Brittany Spanos, a Rolling Stone writer, questioned how organizers would make the event function in one day with so many bands to fit in.

According to ticket information, the event grounds will include three stages. She stated that the When We Were Young celebration will begin at 11 am and finish at 11 pm.

The unveiling of the When We Were Young event comes as a joyful surprise after the 2018 goodbye of Vans Warped Tour and an onerous epidemic that interrupted gigs and festivals for almost a year. When We Were Young includes superstars like My Chemical Romance, Paramore, Avril Lavigne, Jimmy Eat World, and more. Glassjaw, Thursday, Silverstein, AFI, and The Used are among the other performers.

Ohio State Basketball Had A Defensive Setup In Their Maryland Win

Britney Spears Firm On Suing Her Father: Finally Free 13 Years Into Her Conservatorship