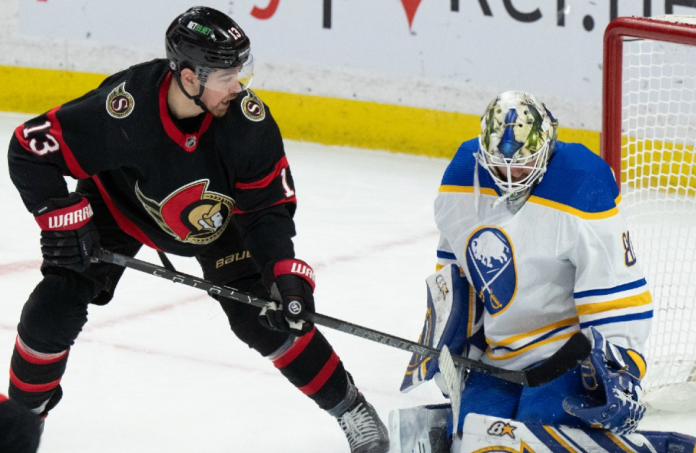 Buffalo Sabers goaltender Aaron Dell got suspended for 3 games from the National Hockey League on Wednesday after a vicious body check of Drake Batherson of the Ottawa Senators left the forward with a serious ankle injury that will see him miss the festivities in Las Vegas next week.

It was a senseless and brutal hit by the Sabre’s goaltender. The sabers scored three goals at the stretch in just under 3 minutes as the first frame drew to an end. This appears to have upset Aaron Dell and he directed his frustration at Drake Batherson who was in an awfully vulnerable position at that moment.

The intention of Aaron Dell was clearly to hurt him. He lined up Drake Batherson as he glided in and then went for a forearm shimmy. It sent the all-star crashing into the board.

It was a very unfortunate move, something that angered the Senators. Head coach of the Senators, D.J. Smith was disgusted with and disdainful of Aaron Dell after the end of the game.

Before Striking Drake Batherson, Dell Had Been Guilty Before

Dell has been equally vicious on the previous occasion and had checked his opponent players just as viciously. The attack on Mark Stone, a former Senator player, was as vicious as the attack on Drake Batherson.

Fans have alleged that Dell had a history of body-checking players outside the playing area and have said that there should be a rule against body checking by Goalies.

The incident was unfortunate for Drake Batherson for several reasons. It was a breakout period for him, winning 34 points from 31 games. He was up for a spot in the All-Star game of the NHL. It could be a big blow to the resurgent Senators as they have lost arguably their star player. They are already without Connor Brown.

Drake Batherson was diagnosed with an upper ankle sprain and the full level of the damage will be known only when the swelling comes down.

NFTs Are To Be Integrated With Instagram Soon, Mark Zuckerberg Confirms

The US Authorizes The Use of Anti-Viral Drug Remdesivir

T2 Biosystems, (TTOO) acknowledged active focus on shares in the last trading session.The stock disclosed a change of -3.36% and its...

VOLATILITY ANALYSIS: Volatility remained at 2.28% over last week and shows 3.11% volatility in last month. Market risk that established with...

You Need to Know this stock? Invitae Corporation (NVTA)

Invitae Corporation (NVTA) observed an average volume with 15336.4K shares and exchanged 152435868 shares on hands in most recent trading session. ...