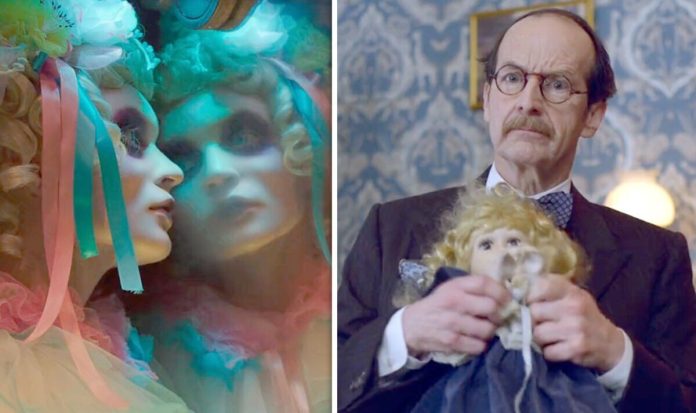 Although creepy killer dolls are a staple of the horror genre, there is a more uncommon and unsettling subgenre where real humans are brainwashed and mentally manipulated to the point where they become living dolls.

This idea has been addressed in various ways in grim horror films like Dead Silence, House of Wax, The Boy, and The Poughkeepsie Tapes, but it has avoided the American Horror Story universe up until this point. American Horror Stories’ “Dollhouse” employs dolls instead as a metaphor for perfection. These live doll horror stories can be unusual types of punishment, incarceration, or eternal halted growth.

The American Horror Stories episode “Dollhouse” delves into a satisfying subgenre of horror that does not let down when it comes to terrifying visuals, but there is also a strong character analysis and contemplation on power, dysfunctional relationships, and the futile pursuit of perfection that ensures it does not just play house. Unquestionably, “Dollhouse” is a visually stunning episode, and its art direction, set design, and cinematography are among its most satisfying features.

The visual aesthetics outweigh the character work, yet it is not nearly a situation where there is no substance behind the look. It is unfortunate that they are not kept in these face masks for a longer period of time because the other “dolls” that Coby is stuck with have such unsettling appearances. No actor wants to remain concealed for the whole of an episode, but once the captives take them off, a lot of impacts are gone.

Although American Horror Stories’ “Dollhouse” has a compelling idea, many of the intricacies of this narrative are poorly handled and fall flat. Every new pageant competition is followed by scenes that are stagnant and in which none of the other “dolls” distinguish themselves. Despite this, there is still enough here to latch onto, both aesthetically and philosophically, and what works is rather good. Because of “Dollhouse’s” unexpected ending, many viewers are likely to ignore some of these concessions.