Home Top Stories Amy Schneider Keeps Her Winning Streak In Jeopardy!, She Is The Longest-Winning... 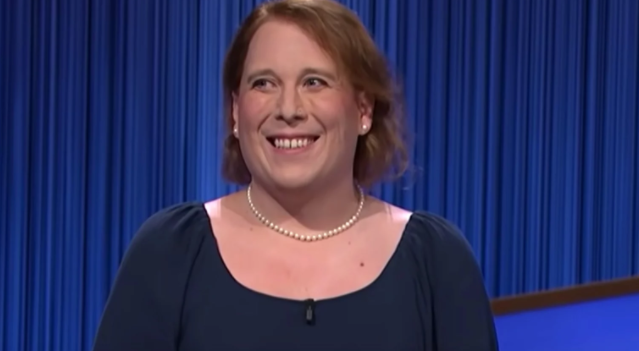 Star Amy Schneider is going on breaking the records of the game. She became the highest-ranked female contestant for consecutive games won on Tuesday and has kept on winning (a streak of 22) straight victories to date. Last week, she also broke the record for highest female earner of all time.

Since starting on the game show, Amy Schneider has surpassed Julia Collins for consecutive wins and Larissa Kelly for highest earnings by women. Among all contestants, she now places fourth in both categories. With her latest win Thursday, she is 10 games away from matching James Holzhauer as the third-ranked contestant ever in consecutive wins, according to the “Jeopardy!” leaderboard.

Amy Schneider’s Reaction After Breaking Such Records And Creating History

Amy Schneider is a transgender and is an engineering manager from Oakland, California.

“It happened months ago for me, and I’m still trying to take it in. In my highest of high hopes, I never dreamed of matching Julia’s streak,” Schneider tweeted after her 20th win. “It’s hard to say how I felt: proud, dazed, happy, numb, all those things. But along with all that, I was also ready for lunch!”

To honor Collins’ record, Schneider wore a sweater in tribute for her 20th game, calling her time on the show extremely meaningful.

Amy stated that “I am a trans woman, and I’m proud of that fact, but I’m a lot of other things, too!”