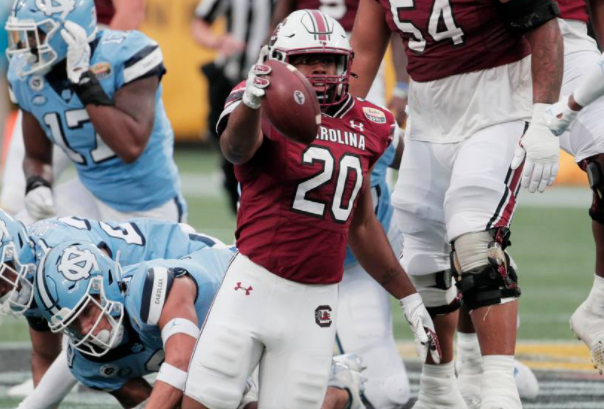 South Carolina has won the esteemed Mayo Bowl and coach Shane Beamer anticipated getting a bucket of mayonnaise dumped over his head would be awful.

He got hit in the back of the head by the cooler before 4 1/2 gallons of mayo cascaded over his face and down his shirt, capping the Gamecocks’ celebration after their 38-21 victory over North Carolina in the Duke’s Mayo Bowl on Thursday.

“I got hammered in the back of the head from the cooler — and then came the mayo,” Beamer said. “I may have a concussion. It was awful.”

He changed his shirt for the postgame news conference, but joked, “I still have mayo in my pockets.”

But, for Beamer, it was all worth it to cap the season with a Mayo bowl win.

How The Mayo Bowl Went For South Carolina

Jaheim Bell had five catches for 159 yards and two TDs for South Carolina (7-6), which rebounded nicely after it lost 30-0 to Clemson in its regular-season finale on November 27. Kevin Harris added 169 yards rushing and a score.

“Everyone on offense was locked in and keyed into the details,” Bell said.

Sam Howell threw for 205 yards and a touchdown, and reserve running back British Brooks had a bowl record 63-yard touchdown run for the Tar Heels (6-7).

“You’re not going to win football games like that,” Brown said. “They ran it, we didn’t.”

TWTR Has Been Offered Brokerage Predictions For Q1 Earnings

Things to consider before investing in cryptocurrency