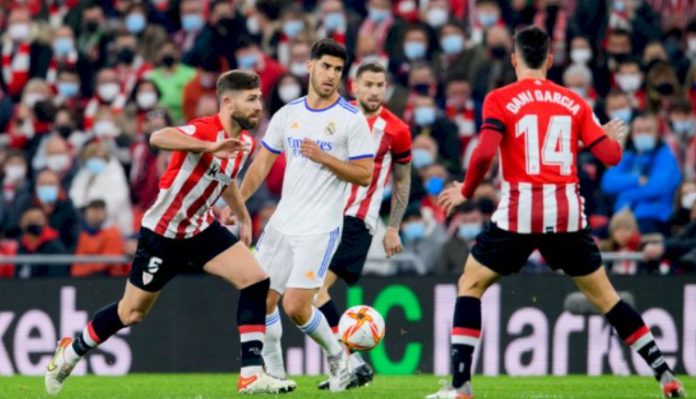 Berenguer came down as a substitute and curled a left-footed shot past Thibaut Courtois in the 89th minute at San Mames to finally provide a reward for Athletic Club, who had dominated the match without being able to make a breakthrough.

Casemiro got the best chance in the game for Madrid but failed to score as it was saved by Julen Agirrezabala.

Real Madrid VS Athletic Club, Madrid Missed Most Of Its Fire Power

Real Madrid was missing most of the stars, including their top scorer Karim Benzema, Ferland Mendy, Miguel Gutierrez, and Marcelo.

Carlo Ancelotti opted for David Alaba on the left and picked a front three of Vinicius Junior, Rodrygo Goes, and Marco Asensio.

The team’s bus was met by a hostile reception on its way into the stadium, with bottles being thrown, smashing one of the bus windows; Athletic Club later apologized for the incident.

Athletic started well, as Courtois saved two-handed from Dani Garcia’s powerful long-range shot. Iker Muniain fired into the side netting after beating Casemiro inside the box, and a last-ditch challenge from Eder Militao was needed to prevent Nico Williams from getting in on goal.

Muniain managed to shoot outside and Lucas Vazquez blocked Inaki’s effort as Athletic Club maintained their control over the game before halftime.

The second half began with more of the same; Inigo Martinez heading Muniain’s free-kick inches wide, before Raul Garcia failed to divert another Muniain delivery towards goal.

Ancelotti introduced Isco for a tired-looking Vinicius, who started for Brazil against Paraguay on Tuesday, but Madrid’s best chance fell to Casemiro, denied by Agirrezabala.

With only seconds remaining in normal time, substitute Berenguer stepped inside Nacho before shooting past Courtois to see Athletic into the semi-finals.