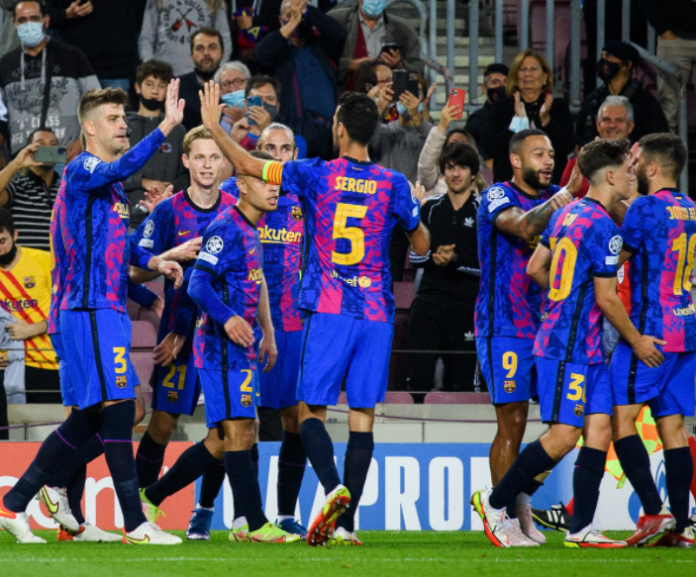 Gerard Pique scored the important goal to earn Barcelona a 1-0 win over Dynamo Kiev in Champions League Group E on Wednesday and kept the Spanish side’s hopes of reaching the knockout rounds alive.

Pique volleyed the ball played in by Jordi Alba and registered the first goal for Barcelona in this season in the Champions League. They were beaten by Bayern Munich and Benfica by a margin of 3 goals in the previous games.

Barcelona has moved up to the third position with 3 pts. They are 1 behind Benfica and 3 away from the Germans. They will face them again on Wednesday.

How The Game Transpired For Barcelona

Barcelona was boosted by the services of Sergio Aguero when he came on as a substitute late in the second half and looked to have recovered from the calf injury he suffered in pre-season after signing from Manchester City.

The Argentina international should be in contention to play in Sunday’s Clasico against Real Madrid.

It was not a convincing win for Barcelona against a Dynamo Kiev team who offered little attacking threat and did not muster a single shot on goal.

Koeman left Philippe Coutinho, Ansu Fati, and Aguero on the bench before the El Clasico. Dest was moved up in the field to play beside Depay and Luuk de Jong in the attack.

After a couple of missed chances by Dest and De Jong, the crowd started booing the home team and Koeman showed his frustration on the sidelines by asking Fati and Coutinho to warm up after only 31 minutes.

Just before the Dutch coach was about to make the substitutions, however, defender Pique eased the tension with a cool close-range finish from Alba’s cross.

Barcelona had an important week and won 2 games in a row now. They would have been eliminated if they had lost against Dynamo but it was not so. The El Clasico is next and the players need the fans back on their end again.

Crime Rate Falls But Online Abusers And Domestic Violence are on the Rise, Says...

The IRS has been warning the taxpayers to be aware of all the scams that have come to the forefront in the wake of...

Governor Tom Wolf of Pennsylvania has been urging the lawmakers of the state to pass legislation that would send most of the households around...

With inflation rates staying at an all-time high for the past three months and giving no indication of abating, the Federal Reserve might consider...