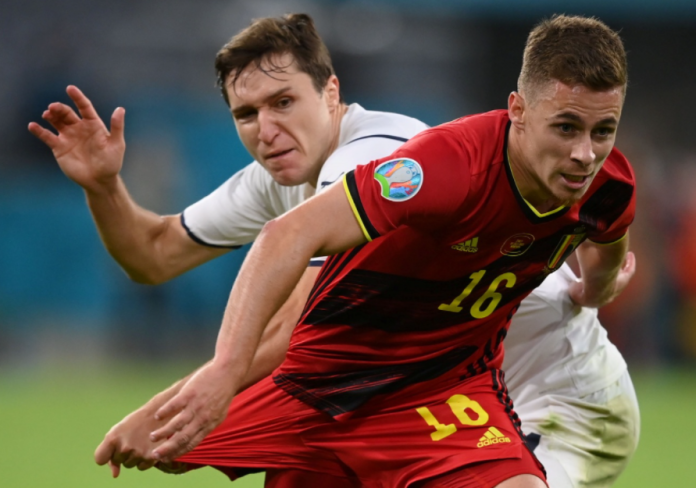 Belgium is desperate for silverware and the stakes are high in the semifinal against France.

Belgian players are quite happy with the fact that N’Golo Kante will not be playing for France. Axel Witsel stated that he might possess 6 lungs and 36 legs.

Kante is in isolation after he was tested positive for the virus. He will miss the game against Belgium, in Turin.

The Relation Between France And Belgium

Belgium is ranked 1 by FIFA but France has spent their time admiring their world cup win.

The last semis between France and Belgium was quite interesting. France won with the help of a goal from Samuel Umtiti. They went ahead later and won the entire thing in Russia in 2018.

Axel Witsel spoke about his first game against France and felt quite disappointed. He was sad that they had been knocked out but was quite proud to have gone so far into the tournament.

The Red Devils lost to Italy in the Euros but took some consolation as they had been beaten by the eventual winners. The Golden Generation of Belgium has become quite impatient and needs silverware urgently. They must get it done before their best players pass from their peak.

The Nations League is a good opportunity for Belgium to win something. The greatest achievement that they have is a silver medal from the Euros held in 1980.

Martinez has waved away Vincent Kompany and also looks forward to the retirement of Jan Vertonghen, 34, and Alderweireld,32. Eden Hazard is now 30 years old and is coming out of poor form. Hazard was deemed unfit in the game against Italy. Kevin De Bruyne played with constant pain in his ankles. Martinez has added Leandro Trossard, Hans Vanaken, and Charles de Ketelaere to his squad and hopes to utilize their services.

Why You Should Consider Using Credit Cards?