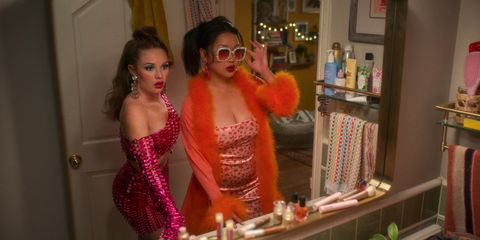 Boo Bitch, an eight-part Netflix limited series that is occasionally sharp but generally uneven, appeals to a cherished but frequently underappreciated tradition: the sitcom in which supernatural elements (such as time travel, foresight, and magic powers) underscore the struggles of being a teenage girl.

Erika Vu, a shy, studious senior played by Lana Condor, is inspired by playfully occult protagonists in irreverent shows like Sabrina the Teenage Witch, Wizards of Waverly Place, That is So Raven, and, more profoundly and successfully, Buffy the Vampire Slayer. She becomes a ghost after being crushed by a moose on the evening of her first high school party.

Boo Bitch’s candy-colored design and jittery energy make me think of Nickelodeon’s Zoey 101, and the clothes resemble a gloriously deranged interpretation of TV adolescent style from the middle of the aughts. Until it isn’t, everything is jovial and more enjoyable than you may anticipate.

Boo Bitch, a comedy series from Tim Schauer, Kuba Soltysiak, Erin Ehrlich of Crazy Ex-Girlfriend, and Lauren Iungerich of Awkward, walks a fine line between campy and hokey, deliciously ridiculous and stupid, cheeky and cringe, before the second half spirals into borderline unwatchable, cheap nonsense. It is partly because of Condor, Netflix’s incredibly likable in-house star of To All The Boys I have Loved Before, and Zoe Margaret Colletti as her quirky, devoted best friend Gia that Boo Bitch manages to hold the center for five 25-minute episodes.

Boo Bitch’s initial interpretation of death is wonderfully wacky. Some jokes soon get stale, like those about a classmate who suddenly gave birth in a hot tub or the long-bullied kid who was blamed for a fart in third grade. Others give the program a brief, welcome bite, such as Gia’s repeated jokes about Lexapro, a talk between the lads about chill vs. cool chicks, and a lot of profanity.

Petro Poroshenko Has Landed In Kyiv To Face Treason Charges