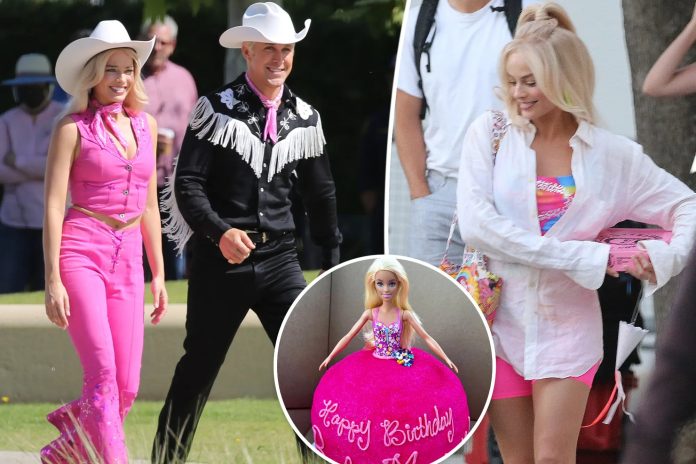 Margot Robbie got what every girl dreams of for a birthday celebration this year. Robbie, the Academy Awards nominee steps in on being 32 on the set of the Barbie Movie by Greta Gerwig with a cake that read Barbie Margot.

Margot Robbie has also been seen walking with a large pink box marked “Donuts” by her side, while a party hat dangled on her finger. The star was rocking the neon rollerblading visuals with her co-star Gosling, 41. Gosling is playing Ken in Barbie. These two co-stars were also seen enjoying a bout of rollerblading at Venice Beach. Will Ferrell was also present there. Ferell happens to be playing as a toy company’s CEO.

The multi-star film can be the biggest hit of the year. Robbie, who also serves the movie as one of the producers, hinted about the film in 2020 when she said, “whatever you are thinking, it’s not that.” In her interview with the Hollywood Reporter. She said they are trying to be a little left than the usual center with the movie where whenever the fans think of something, the movie will give the audience what they did not want.

Margot Robbie, the Aussie actress, has also openly expressed how excited she was about the movie in a different interview with People, where she said that it is a great chance to “throw some positivity out in the world”. She also said that she is looking forward to being aspirational to the younger generations to come.