Home Sports Cadiz-Barcelona Match Paused Due To A Medical Emergency 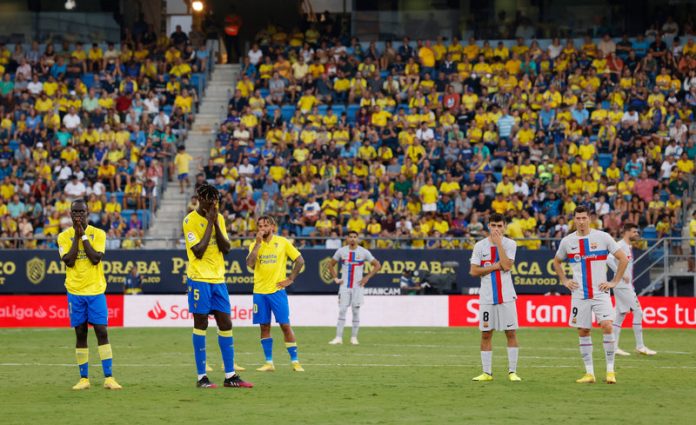 The Cadiz-Barcelona La Liga match has been called off following allegations of a medical issue occurring among the spectators.

Due to a medical situation involving a supporter in the stands, the Cadiz-Barcelona game has been suspended. The club’s official statement on Twitter said, “The players are leaving for the locker rooms.

The concern was evident among the players and the spectators within the Cadiz-Barcelona stadium, albeit its exact nature is unknown. Around the 80th minute mark, the game was called due to the first reports of the incident.

Around the 85th minute, goalkeeper Jeremias Conan Ledesma of Cadiz was spotted giving the concerned party a medical kit. The players were eventually ordered to leave the field after a protracted pause. When the two teams will retake the field is currently unknown.

Cadiz-Barcelona Game Was 0-2 When They Paused The Game

The Barcelona website first reported the game’s suspension and later confirmed it: “The game has been on hold for approximately 15-20 minutes owing to an apparent medical emergency in the fans and the referee has led the two teams off the field.”

Ansu Fati and Ousmane Dembele scored twice in a matter of seconds to help Barcelona defeat the opposition 4-0 at 12:35 IST. He stated, “The fan has regained his pulse and has been brought away in an ambulance. The game will resume. He kept reviving and falling, but eventually, they were able to stabilize him.

At 9:05 o’clock, play resumed. time zone. Ansu Fati and Ousmane Dembele added to goals from Frenkie de Jong and Robert Lewandowski to help Barca finish the game with a 4-0 victory.