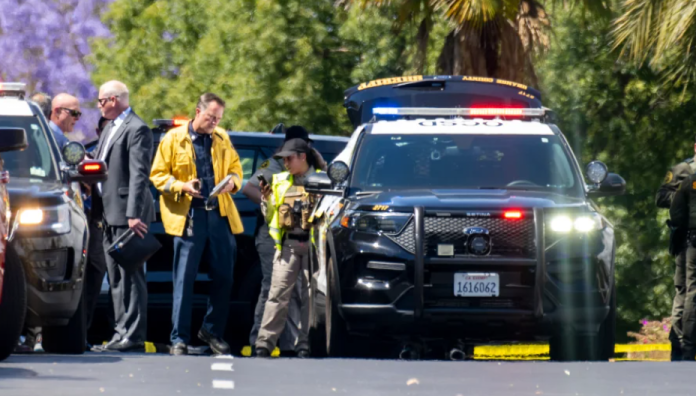 A man who opened fire during a lunch reception at a Southern California church on Sunday was detained by parishioners, according to a sheriff’s official who called their intervention an act of “exceptional heroism and bravery.”

One person was killed and four others were critically wounded in the afternoon shooting at Geneva Presbyterian Church in the city of Laguna Woods, Orange County Sheriff’s Department officials said.

The suspect in the shooting, an Asian man in his 60s, was in custody and deputies recovered two handguns at the scene, Undersheriff Jeff Hallock said. A motive for the shooting wasn’t immediately known but investigators don’t believe the gunman lives in the community, Hallock said.

The majority of those inside the church at the time was believed to be of Taiwanese descent, said Carrie Braun, a sheriff’s spokesperson.

The Heroic Event Of The California Shooting

Between 30 and 40 people were gathered for lunch after a morning church service when gunfire erupted shortly before 1:30 p.m., California officials said. When deputies arrived, parishioners had the gunman hog-tied and in custody.

“That group of churchgoers displayed what we believe is exceptional heroism and bravery in intervening to stop the suspect. They undoubtedly prevented additional injuries and fatalities,” Hallock said. “I think it’s safe to say that had people not intervened, it could have been much worse.”

A man died at the scene and a fifth injured person suffered minor injuries, officials said. All the victims were adults.

The lunch reception was honoring a former pastor of a Taiwanese congregation that has services at Geneva, according to a statement from the Presbytery of Los Ranchos, a church administrative body.

Federal agents from the FBI and Bureau of Alcohol, Tobacco, Firearms, and Explosives responded. The FBI also agents to the scene to assist the sheriff.

Laguna Woods was built as a senior living community and later became a city. More than 80% of residents in the city of California 18,000 people about 50 miles southeast of Los Angeles are at least 65.

Wally Funk Will Be Carrying A History Of Sixty Years To Space!

Brighton Is Set For The Crystal Palace Match, Graham Potter Looking Forward To It

Are You Looking For Active Stock? Payoneer Global (PAYO)

Payoneer Global (PAYO) disclosed a change of 17.96% and its listed share value at $6.7 in the recent trade transaction. This...

ChargePoint Holdings, (CHPT) exchanged 21207098 shares on hands in most recent trading session and observed an average volume with 10198.4K shares....

Meta Platforms, (META) exchanged 21224415 shares on hands in most recent trading session and observed an average volume with 30041.2K shares....

VOLATILITY ANALYSIS: Volatility remained at 5.12% over last week and shows 5.63% volatility in last month. Market risk that established with...