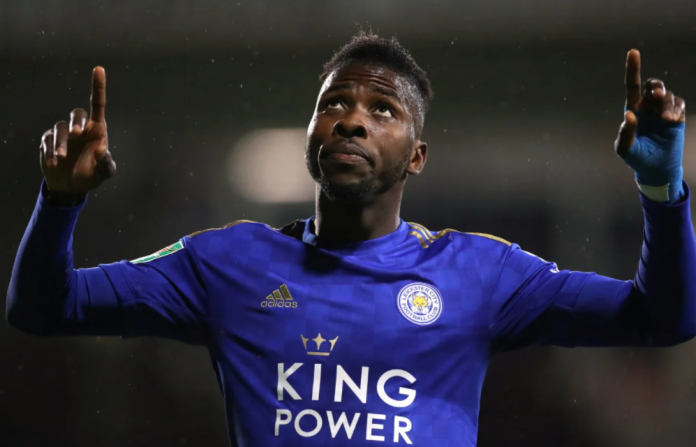 Kelechi Iheanacho had traveled with Leicester City to Warsaw but faced problems with his traveling documents. He was not allowed into the country.

Manager Brendan Rodgers stated that they had an issue with Kelechi Iheanacho and that his documentations were not sufficient. He was not able to travel with the team.

Kelechi Iheanacho Ruled Out Of Europa Clash With Legia Warsaw

Kelechi Iheanacho has been ruled out of Leicester City’s Europa match after he was turned away by the Polish border police.

He traveled to Warsaw with the team but had some problems with his travel documents. This is why he was not given permission to enter the country.

The Foxes will face Legia on Thursday but will have to play without the Nigerian striker. He was the top scorer last season and fired 19 goals for the FOxes. He will have to return to the United Kingdom now.

Rodgers stated that the issue with Kelechi was with his documents as it was insufficient. He was not able to travel into Warsaw and will be unavailable for the match against Legia.

The paperwork that he carried with himself did not grant him permission into Poland and Rodgers plans to take a look at them after they return from the game.

Jonny Evans has not traveled as he is facing an ongoing foot issue. This problem had dogged him earlier this season. Wilfred Ndidi is banned so even he is not traveling.

Legia is currently at the top of Group C after they beat Spartak Moscow in their first game. They beat the Moscow side 1-0. Leicester City dropped points against Napoli after giving away a 2 goal lead and ending the match with a 2-2 draw.

Queen Elizabeth Does Not Bring Up Meghan Markle, Prince Harry, Or Andrew In Christmas...

How to Help a Child With Cerebral Palsy Become Independent

You Need to See this stock? Micron Technology, (MU)

Micron Technology, (MU) acknowledged active focus on shares in the last trading session.The stock disclosed a change of 1.04% and its...

Coinbase Global, (COIN) disclosed a change of -5.20% and its listed share value at $59.45 in the recent trade transaction. This...

MEI Pharma, (MEIP) observed an average volume with 7871.67K shares and exchanged 70372 shares on hands in most recent trading session....

SIGA Technologies, (SIGA) exchanged 352621 shares on hands in most recent trading session and observed an average volume with 9136.72K shares....

Should You Observe this stock? Deutsche Bank Aktiengesellschaft (DB)