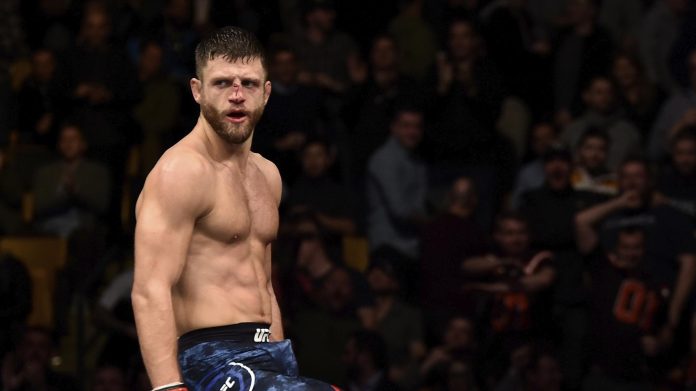 Calvin Kattar demonstrated that he’s still a key player in the UFC’s featherweight division even after a year of inactivity and the worst loss of his career.

On Saturday, Kattar (23-5) became the first man to defeat Giga Chikadze (14-3) inside the UFC Octagon. He outclassed the Georgian opponent and won a five-round unanimous decision. Kattar won with scores of 50-44, 50-45, and 50-45 from all three judges.

The 145-pound fight was the main event of UFC Fight Night inside the Apex.

Calvin Kattar, 33, endured 445 total punches in a crushing loss to former champion Max Holloway over a year ago today.

Chikadze had appeared to be a genuine championship contender heading into the weekend. He was a karate black belt who had won seven straight fights, including victories over Cub Swanson and Edson Barboza. Calvin Kattar nullified Chikadze’s offensive by keeping him on the back foot for the duration of the bout. He pushed Chikadze aside with his footwork and a sharp jab. With insufficient space, Chikadze struggled to apply his ruthless kicking game.

Chikadze got many wounds above his right eye and nose by the third round. He still had his moments and performed well resisting virtually all of Kattar’s attempts to knock him down, but the strain took a noticeable toll on his efficiency and gas tank. In the last seconds of the bout, Kattar knocked him to the ground.

Calvin Kattar now has a record of 7-3 in the UFC. He was more than a 2-to-1 betting underdog going into Saturday. Chikadze, who fights out of Kings MMA in California, suffers his first defeat since June of last year.

At this point we don’t see inflation running out of control: Philadelphia Fed President

States have stepped in to take the lead on stimulus checks even as federal funding dries up. Politics remains mired in partisanship in Washington...

Republican Representative Matt Gaetz, under investigation for sex trafficking, made hateful comments about women, commenting that only ugly people support abortion, women who are...

Part of President Biden's economic plan to help the US recover from the after-effects of the pandemic includes plans to encourage healthy economic competition...

Ginni Thomas Could Be Subpoenaed By January 6 Committee: Wife Of Republican Leaning Supreme...

Conspiracy theory nutcase and wife of Supreme Court Justice Clarence Thomas may be up for subpoena next by the January 6 Select Committee investigating...

Soccer fans who run onto the field or use objects like smoke bombs and pyrotechnics at matches in England will receive an automatic ban...