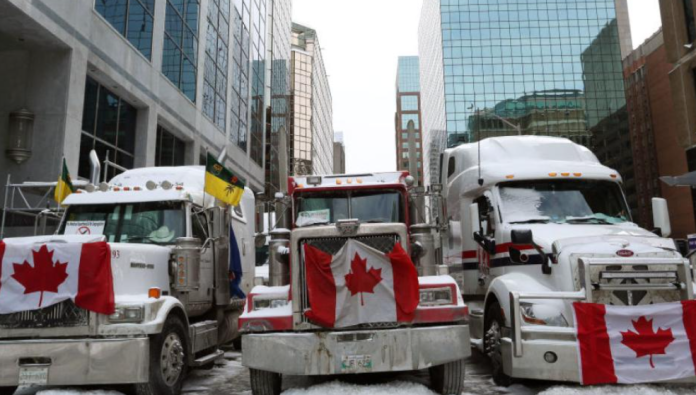 From the western province of Alberta, moving east to Quebec City, and in cities and towns in between, thousands of Canadian truckers have hit the streets in trucks, tractors, and cars to protest the nation’s Covid-19 restrictions.

With persistent and noisy horn honking, Canadian truckers are demanding governments at all levels lift their health restrictions, including vaccine and mask mandates, lockdowns, and restrictions on businesses and gatherings.

“The whole event has gone beyond just vaccines and it is now about the entire ordeal,” protester James MacDonald told CNN, adding he’s been in Ottawa since last weekend and has no intention of leaving until health measures are dropped.

The “Freedom Convoy” was initially started by truckers protesting a recent mandate requiring drivers entering Canada to be fully vaccinated or face testing and quarantine requirements. But others have joined the cause. Demonstrators reached Ottawa, Canada’s capital, last weekend, and its organizers said the protests will linger there and elsewhere if necessary.

Ottawa‘s police chief called it a “nationwide insurrection driven by madness,” claiming his city was under siege and would need more reinforcements beyond those it had already received from other police forces.

No Sufficient Resources To Address The Canadian Trucker Protest

“We do not have sufficient resources to adequately and effectively address this situation while adequately, effectively providing policing in this city,” Ottawa Police Chief Peter Sloly warned during a police services meeting Saturday.

“I understand the police force does not want to directly intervene for fear of violence,” Ottawa resident Jack Krentz told CNN this week, “but it feels like we’ve been left alone a little bit.”

Ottawa police said they have responded to more than 400 calls for service related to the Canadian truckers since they began last week. At least 50 criminal investigations are underway, including 11 involving potential hate crimes.

Biden Nominates Deb Haaland To Be The Interior Secretary

Student Loan Moratorium To Be Extended By The White House

$45K Bitcoin Is Trading At A Heavy Discount Believe Experts