Ex-President Donald Trump managed to secure an easy victory in the 2024 GOP nominations at the CPAC gathering that took place in Texas. Trump has been making major statements about coming for yet another presidential run in the next election and he took a major step forward by capturing 70% of the ballots that were cast in this anonymous straw poll.

The results have been decreed according to the Conservative Political Action Conference late Sunday. Interestingly, this shows an increase of around 55% support that he won previously in February. Back then, the poll was a hypothetical 2024 Republican primary matchup straw poll.

After winning the poll, the former President went on to thank every single individual for their support at the CPAC. This was followed by the keynote address which he gave just minutes later. The Governor of Florida, Ron DeSantis came in second with a voting percentage of 21%.

No one else could even go beyond 1%- which included around 19 potential contenders for the 2024 Republican White House. DeSantis, one of Trump’s major allies got popular over the course of last year for his resistance to COVID restrictions as well as lockdowns amid the coronavirus pandemic went on to win the second 2024 ballot question.

With Trump not being a part of the second hypothetical ballot, DeSantis went on to win with a percentage of 68%, with Mike Pompeo coming in at 5%, and Donald Trump Jr. along with Senator Ted Cruz coming in at 4%. The results of the straw poll, along with the keynote speech of Trump at the CPAC were the most anticipated moments of the gathering of the conservative activists and leaders that have gone throughout the country.

TRI Has A Price Target Of $128 Set By Scotiabank

Pedestrian vs. Cyclist: Who is at Fault in an Accident

Coaches And Players Speak Of Steph Curry Even As One Of The Greatest Even... 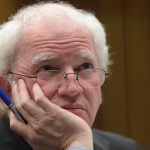