Home Top Stories Dont Look Up: Jennifer Lawrence And Di Caprio Teams Up For A... 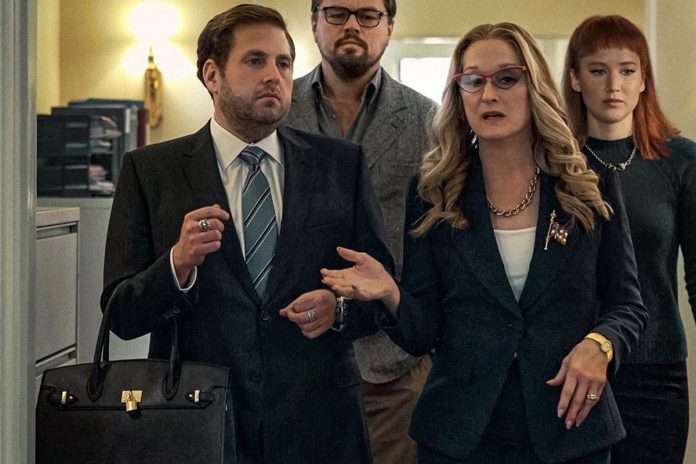 The star-packed cast of the Netflix comedy includes Meryl Streep, Timothée Chalamet, Ariana Grande, Jonah Hill, and Rob Morgan. The official trailer of Adam McKay’s new comedy Dont Look Up has been released and the star-studded crew did not disappoint.

The Cast And Plot For Dont Look Up

Jennifer Lawrence and Leonardo DiCaprio have been cast as pair of astronomers, Kate Dibiasky and Dr. Randall Mindy, attempting to warn the world about the apocalyptic threat due to an approaching comet in the upcoming film Dont Look Up.

McKay, writer-director, explains how he landed his leads. For his leading lady, he wrote the character around Jennifer Lawrence. He knew he wanted to cast her since they have known each other for a long time, have mutual adoration and she is hilarious. She was the first to be cast.

For his leading man, he said that DiCaprio was very interested but then the pandemic hit. So they used the time to thoroughly go through the script and talk about his character. He shared that Leonardo is very smart and he understands characters in depth. So working with him was very enjoyable.

DiCaprio stated that Adam has an unmatched ability to spark conversation with humor and timely stories. He knew when he read Adam’s script that it was unbelievably unique, as it struck an important chord regarding the modern world we live in. Adam has woven an extraordinarily timely message about society, how people communicate, our current priorities, and the climate crisis into a ridiculously funny yet important movie.

Adam McKay’s extremely promising movie, Dont Look Up will be released in select theatres on December 10. It will available on Netflix on December 24.

Could There Be A New Stimulus Check Payment This Year?