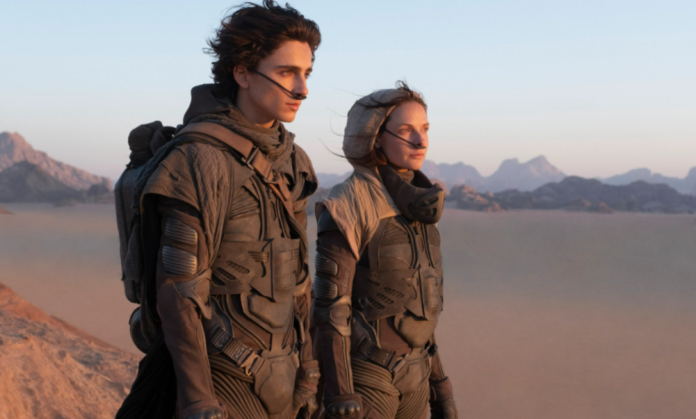 Dune, adapted from Frank Herbert’s sci-fi epic, was a strong surprise for Warner opening at $40.1M in the North American market. Given the pandemic situation and the unconventional theatrical debut of the film, it is a respectable beginning.

Dune has been playing in 4,125 national theaters. It has also premiered on HBO Max simultaneously, like all other movies simultaneously. This is likely to have a strong negative effect on ticket sales.

In what is being considered a milestone for Warner Bros., Dune landed the biggest ever tally over the first 3 days even since it began the day-and-date strategy on Max. This high mark was held previously by Godzilla, released in April, at $31M.

Dune Scores Over Other Concurrent Releases By Warner Bros

Other much-anticipated releases, on view concurrently on HBO Max, including Space Jam: A New Legacy, The Suicide Squad, and In The Heights’ musical adaptation, however, failed to live up to their expectations at the box office.

Jeff Goldstein, the domestic distribution head at Warner Bros. was all smiling. He said that exhibitors were thrilled at the strong showing, the positive feedback from fans was the best part.

He said the fans had loved the big-screen experience of Dune, and it had been an outright winner of a film for movie lovers.

Dune is the first in an expected saga in 2 parts. Villeneuve plus other cast members of the film had said that they would love a sequel that would bring to a culmination the story of political dynasties warring over access to a key planet.

A sequel will ultimately depend on the final ticket sales. With a hefty price tag of $165M, it is not yet clear if box-office sales would be enough to justify a sequel. The high production costs were caused by the millions spent on marketing. The movie was produced and co-financed by Legendary Pictures.

A return to the desert of Arrakis will be possible only if Dune performs just as well on the HBO Max platform. That could convince studio bosses to throw in another $165M to bring the interplanetary tale to its successful completion.

What cryptocurrency holds for the world?

Canadians Are Showing Off Their Talents In Tennis, Leaves People Shocked

Mike Mayock Fired After 3 Seasons With The Las Vegas Raiders