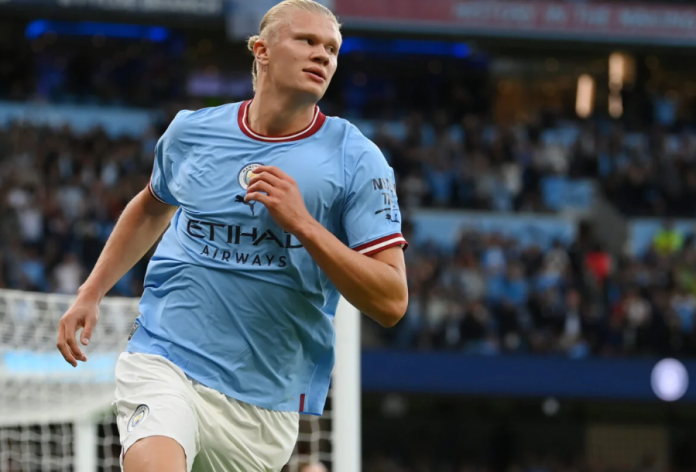 Erling Haaland and Manchester City had to be content with a disappointing 1-1 stalemate against Aston Villa, this Saturday, courtesy of a Leon Bailey goal.

Shortly after the second half began, Erling Haaland rose highest and side-footed to beat Emiliano Martinez. This was his goal number 10 in 6 games in the Premier League games, equaling the league record with regards to the least matches to score in double digits. Bailey, on the other hand, reacted about 15 minutes till the end of the game to get Villa a point while facing the PL defending champions.

Jacob Ramsey, the Midfielder,  was especially energetic for the home side at Villa Park, supplying the assist for his team’s equalizer as well as causing many issues for Pep Guardiola’s side.

Following the interval, though, City quickly asserted their supremacy, with Erling Haaland emerging at the far post and volleying home following a looping attempt by Kevin De Bruyne.

In minute 58, Ramsey gained possession and rushed on Watkins’ return ball, but the midfielder’s weak touch let Ederson space and time to run out to smother.

In minute 67, De Bruyne nearly extended City’s lead following a tremendous free-kick that grazed the crossbar’s top. Erling Haaland also gave Martinez work to do with an attempt using his right foot inside the 6-yeard box.

Gerrard then introduced Philippe Coutinho, who scored ten minutes till the end only to have the flag signal it as offside.

There was no review using the VAR review available for Coutinho’s effort. However, replays revealed Coutinho was onside. Villa manager Steven Gerrard stated it was a “valid goal.”

The draw puts City in 2nd position with 14 points, trailing leaders Arsenal by one point, who face Manchester United on Sunday at Old Trafford, and Guardiola lamented his team failed to end the game.

10 Questions to Ask In an Interview