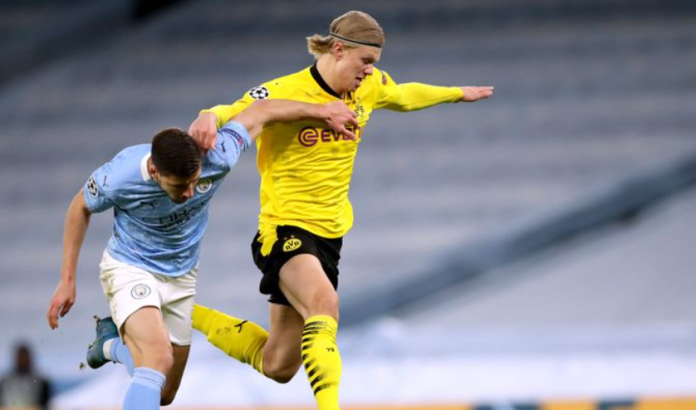 Erling Haaland scored twice and set up the third as Norway beat neighbors Sweden 3-2 in the Nations League at the Ullevaal Stadium in Oslo on Sunday.

“I’m speechless!” the 21-year-old striker told Norwegian television, before adding: “It’s the first time I’ve played for a sold-out Ullevaal. And to win against Sweden in the last match of the season, it’s beautiful.”

Erling Haaland Is Heading For Manchester Next

Haaland, who is heading for Manchester City from Borussia Dortmund this summer, gave Norway the lead in the 10th minute by heading in a near-post cross.

He added a penalty in the 54th minute after Hjalmar Ekdal fouled Alexander Sorloth.

It was Haaland’s 20th international goal in 18 Norway appearances.

Erling Haaland then crossed for Sorloth to head home and restore the host’s two-goal lead after 77 minutes.

Swedish skipper Forsberg was not impressed by the goals his team conceded.

“It is too easy to score against us,” he said.

“Sweden is better offensively than defensively at the moment…I think we were the better team but it was important to get the early goal. It gave us a mental boost.”

The victory gave  Norway 10 points after four matches in Group B4. They lead second-place Serbia, who play away to Slovenia later Sunday, by four points and Sweden by seven.

A Guide For The 2022 World Cup: Players To See, Matches To Look For

Binance Will Operate In Abu Dhabi Soon, All Things Being Equal