Home Sports Injured Miami Heat’s Tyler Herro Again Out Of Game 6 Of The... 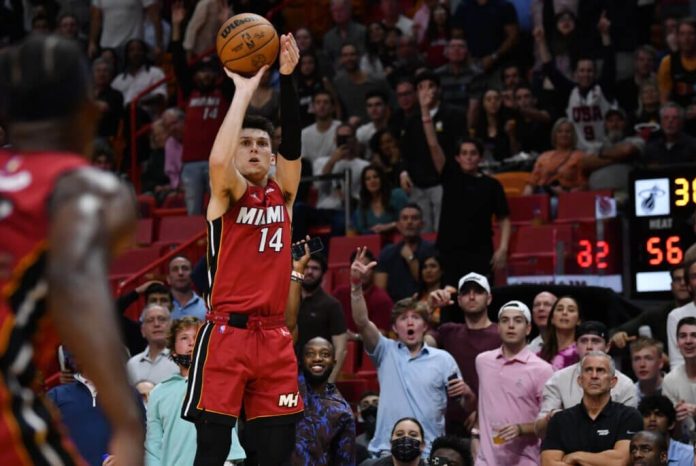 Miami Heat is on the verge of elimination with one of their best players out of Game 6 of the East Finals. Tyler Herro named this season as the NBA’s 6th Man of the Year, is out for the 3rd straight game with a strain in his left groin.

The head coach of the Miami Heat, Eric Spoelstra has been forced to fall back on the same lineup in the Heat’s Game 6. Guard Tyler Herro was with his team that traveled to Boston but was marked as questionable for the game owing to the reported injury.

Spoelstra said that while Tyler Herro had made marked progress, the decision to include him in the team is not easy as he is not fully ready to play an intense game at this moment.

Tyler Herro’s team is trailing the Celtics 3-2 in their best-of-7 game in the Eastern finals. The Miami Heat continue to take a cautious approach to his injury despite Herro expressing a desire to play.

But Tyler Herro has been among the top offensive players for the Heat in the regular games of this season, leading the Eastern finals. He has averaged 20.7 points with a team-high of 17 shots a game.

The team is missing the shot-creating abilities of Herro and his 3-level scoring capacity against the elite defense of the Celtics. Guard Victor Opadipo is expected to assume a bigger role in the offense, coming off the bench to assist in making up for the void that Herro’s absence has caused.

The Celtics, on the other hand, have been assured of the availability of Robert Williams and Marcus Smart as they look to close out the series and set up an NBA Finals matchup against the Golden State Warriors.

4 Trending Cryptocurrencies to keep an eye on

Stimulus Check Update: Are There Any Sign Of Another Payment

Americans have already been clamoring for stimulus check funding for a purpose this year. Starting mid-2021, there has been a significant rise in the price...

” “You Need to Know this stock? Alaunos Therapeutics, Inc. (TCRT)

Alaunos Therapeutics, Inc. (TCRT) acknowledged active focus on shares in the last trading session.The stock disclosed a change of 32.00% and its...