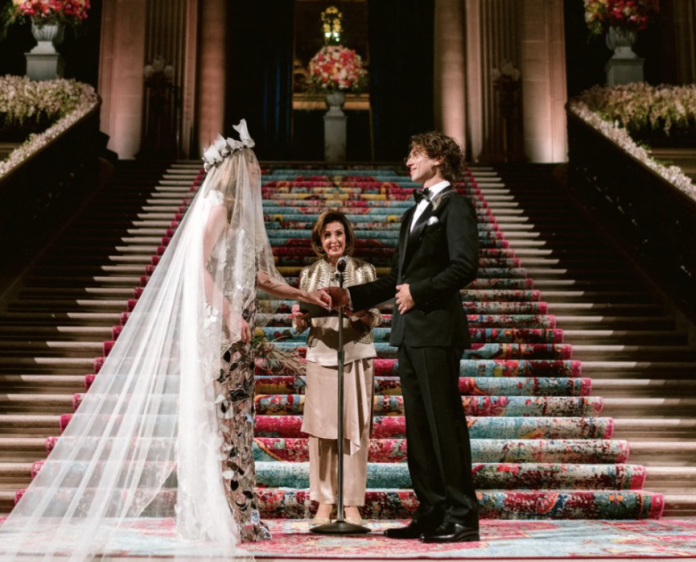 Model and artist Ivy Getty, and heir to the billions of her great-grandfather, John Paul Getty, married her partner Tobias Engel in a ceremony presided over by Nancy Pelosi. Ivy married Engel this weekend at City Hall in San Francisco.

Ivy revealed that she had wanted to wear John Galliano’s creation for Maison Margiela for her wedding ever since the couple had been engaged a year back in September. She gets her love for Galliano’s creations from her grandmother Ann, who always donned his designs. She died 2 weeks after Ivy Getty’s engagement.

Ivy is the daughter of John Gilbert Getty, the musician and art collector. The extravagant event was joined by, among others, actress Anya Taylor-Joy. Nancy Pelosi, House Speaker officiated the wedding ceremony.

Ivy Getty said that the ceremony was everything that she had ever dreamed of. She was happy that it had magically come true.

Taylor-Joy posted her tribute to Ivy Getty and referred to her friend as most beautiful.

She wrote that being by her side had been a privilege. She called her existence a miracle and posted a number of pictures from Getty’s pre-wedding ceremonies and festivities.

Taylor-Joy added that she was proud of Ivy and what she had become. She added that she should not have any doubts that she loved her. She lovingly referred to as little spice monkey and congratulated the bride.

Ivy Getty replied to her friend and wrote that she loved her always and forever. She said that Taylor-Joy had been the greatest maid of honor ever imaginable. She mentioned the fun they had. It had been an incredible and unforgettable weekend of magic and love, she concluded.

The festivities began at the San Francisco Palace of Fine Arts, redesigned as a 1960s nightclub. It was mandatory for guests to be COVID-19 vaccinated. The bride wore 3 different vintage outfits for the occasion.

A pre-marriage picnic was arranged for Friday afternoon, followed by a pajama party. Ivy Getty looked incredible in the wedding dress covered with glass shards that clinked as she moved.

California Governor Gavin Newsom attended the event with their family.

Mike Pence Assailed The Administration Of Biden In Iowa!