Home Entertainment Jodie Sweetin Is Engaged To Her BF Of More Than 3 Years... 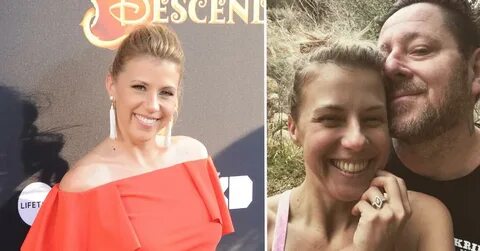 Jodie Sweetin is now a bride-to-be. She is engaged to her long-time beau, Mescal Wasilewski.

On Monday, the “Full House” alum rushed to Instagram to announce that her partner Mescal Wasilewski had proposed. She posted a snapshot of herself and Wasilewski standing close together in the outdoors, smiling. Sweetin reveals her diamond ring in the photo.

Jodie Sweetin Is Deeply In Love With Fiance

In her caption, the actress quoted Maya Angelou. Jodie Sweetin expressed her everlasting devotion to Mescal and referred to him as her person. Jodie expressed her excitement at the prospect of spending the rest of her life with him.

Sweetin, who turns 40 on Wednesday, concluded by saying that she will enjoy turning 40, with the hashtags #soontobemrs #moreinloveeveryday #happy40thbirthdaytome.

Jodie Sweetin first revealed her relationship with Wasilewski on Instagram in 2018, sharing a collage of photographs of the pair together and a lengthy caption.

Jodie Sweetin’s fiance also shared the news on his Instagram account and reposted the snap of the newly engaged couple.

The news of Jodie Sweetin’s engagement comes just over one week after beloved Hollywood icon and Full House patriarch Bob Saget passed away. Sweetin along with other cast members of the show including  John Stamos, Dave Coulier, Candace Cameron Bure, Lori Loughlin, Andrea Barber, and Scott Weinger had shared a joint statement after his passing. The Full House star was laid to rest on January 14 with all the lead cast members in attendance at his funeral in Los Angeles.