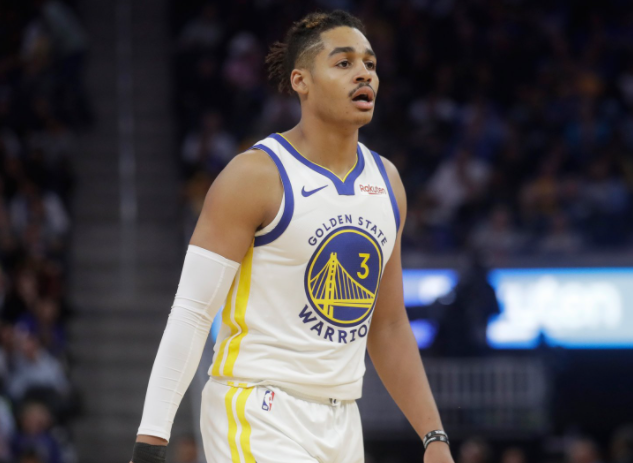 Jordan Poole joins Kevin Durant as the only 2 Golden State Warriors players to have accomplished this unique feat.

This sentence itself is impressive enough, it doesn’t even matter what the context is.

Jordan Poole, who scored 33 points on 10-of-13 from the floor and 8-of-11 from 3-point range, helped carry the Golden State Warriors to an impressive 119-104 win over the Toronto Raptors on Sunday night at Chase Center.

Jordan Poole Can Be Considered As The Third Splash Brother

Jordan Poole and Kevin Durant are the only two players to have scored that many points on 13 or fewer shots is rather surprising given the Warriors’ elite shooting over the years from players such as Steph Curry and Klay Thompson.

Nevertheless a very impressive feat for Poole, who is quickly becoming a possible 3rd “Splash Brother” candidate after Curry and Thompson.

Poole’s 33 points Sunday night was his second game in a row scoring 30-plus points, and his third so far this season. On a night where Curry only scored 12 points, the Warriors were lucky that the third-year guard stepped up.

As to exactly when Klay will be activated, Warriors coach Steve Kerr downplayed a report indicating Thompson already has received clearance to fully participate in team practices and scrimmages, with his likely return coming the week before Christmas.

Wiggins made six 3s, knocking down his first 5 shots for 14 early points. Golden State started 9 for 14 to build a 27-9 lead late in the opening quarter. The Warriors (15-2) never trailed in winning their fourth straight and 11th in 12.

The Stand Brought To Screen By Eminent Actors

Brazil Keeps Their Winning Start After A Barbosa Penalty