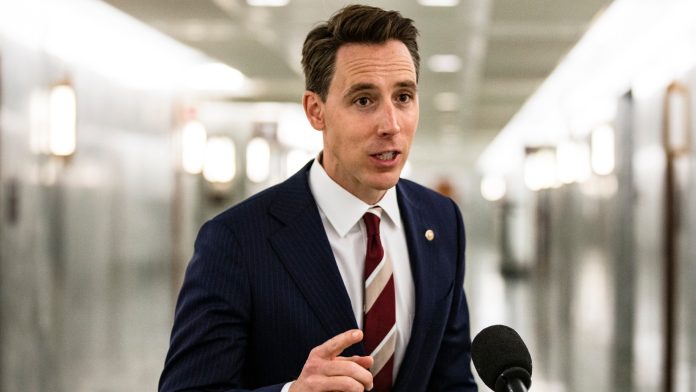 Sen. Josh Hawley’s surprise appearance during the committee hearing on Thursday, January 6, was a big hit on Twitter. The committee displayed the now-famous image of the Missouri Republican walking across the East Front of the US Capitol from a secure area behind barricades while raising his fist in support of demonstrators gathering outside security gates.

When the demonstrators he helped incite stormed the US Capitol, a video of Josh Hawley fleeing was then shown.

At that point, Twitter was ignited by the chicken, Forrest Gump, and running gifs, some of which were put to music. If there is a Guinness World Record for appearing in the most music videos and movies in one night, Sen. Josh Hawley (R-Mo.) may have broken it on Thursday. There was “Chariots of Fire,” with Hawley moving slowly while the movie’s well-known, piano-punctuated theme tune played.

Josh Hawley Ran Away From Rioters

The catchy theme from “The Benny Hill Show” then followed by songs from the “Rocky,” “Titanic,” and “Curb Your Enthusiasm” soundtracks.

Josh Hawley then entered the music industry, making appearances in songs such as “Born to Run” by Bruce Springsteen, “Runnin’ With the Devil” by Van Halen, and “Running Up That Hill” by Kate Bush, a 1985 song that was recently revived and shot to the top of the charts due to its prominence in the Netflix series “Stranger Things.” But all of the videos of Hawley were the same—two excerpts that were shown live at the most recent session of the House committee looking into the attack on the U.S. Capitol on January 6, 2021. The committee said that both depicted Hawley fleeing protesters as they barged inside the structure.

The audience at the hearing laughed in real-time as a result of the films, although the internet was still in its infancy. People brutally burn Hawley for hours after only a few minutes. Some people added music to the videos, usual songs with lyrics about running.

The Child Tax Credit: Ways To Claim Stimulus Check Once You Have Missed The...