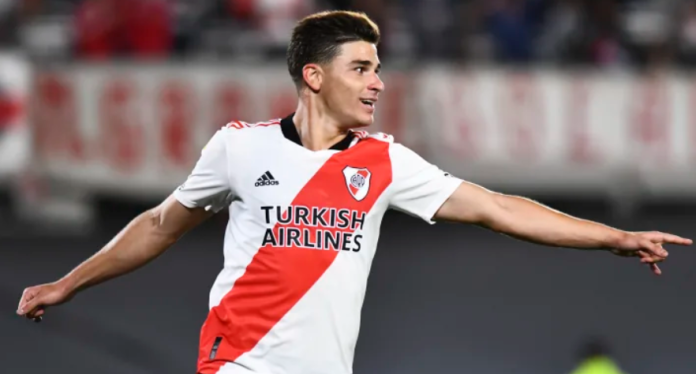 Several Manchester City fans have given their opinions suggesting Julian Alvarez will sign for their club in the upcoming summer at the earliest.

Sergio Aguero has left Man City and the club needs to urgently replace the striker. Rumors about Julian Alvarez have picked up pace since then.

The Citizens are willing to meet any financial package Real Madrid was offering for Erling Haaland, which was another surprise name thrown in the mix.

Reports from a variety of high-profile journalists in Argentina suggested that Manchester City could be on the verge of securing one of the most sought-after young forwards at present.

Since then, varying reports have predicted what Man City’s plans are with the 21-year-old with the overall opinion being the club are likely to send Julian Alvarez back to River Plate for the remainder of the 2021/22 season.

Rob Dawson has suggested that Alvarez will not move to the Etihad till next summer and he will be considered as a Man City first-team signing.

He adds that there is still the option of the youngster becoming part of Pep Guardiola’s squad next season, but that will not change their plans of recruiting a clinical number nine this summer.

Lots of Manchester City supporters have reacted to that news over on City Xtra’s Twitter page, with the majority visibly frustrated that Alvarez is unlikely to be integrated into the first-team squad instantly.

The Fans React To The News About Julian Alvarez

One fan tweeted: “What are we just meant to watch him play for another club whilst we literally don’t have a striker”

Another chimed in with a tone of surprise, “Woah Woah Woah, next summer?”

Some were quite disappointed with the news and that they were not surprised about the signing.

“Yeap. We’re staying no striker FC. What’s the point of loaning him for 6 months when we LITERALLY HAVE NO STRIKER”

How Technology Is Transforming Boating