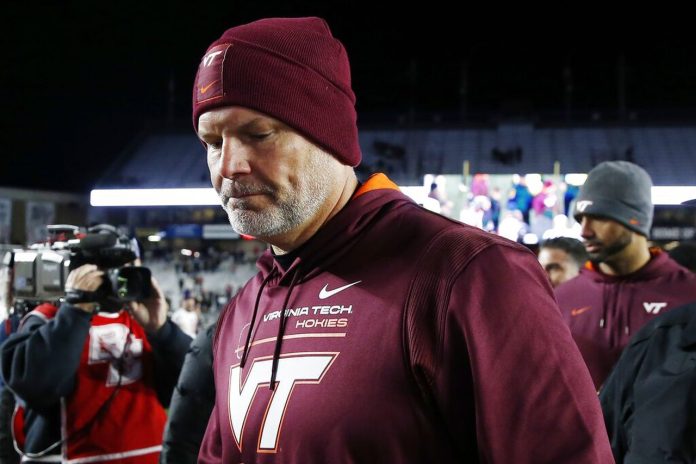 Virginia Tech has fired their head coach Justin Fuente and announced the news on Tuesday. Whit Babcock announced the decision, stating that a search is underway and that JC Price is the interim head coach for the remainder of the season.

Justin Fuente was hired by Virginia after the 2015 season and had managed to win 10 games in his first season as the head coach. After that feat, he had struggled to maintain the same level of success and coached the Hokies to a 5-5 record in 2021. He will be exiting Blacksburg with a record of 69-54.

Babcock announced that they appreciated the contributions made by Justin Fuente and acknowledged the fact that he had made a positive impact on their student-athletes during his time at Virginia tech. It was not easy for them to make the change but they had to look for something new as the time was optimum to look for a new leader in their footballing program.

Virginia Tech is one of the most attractive football jobs in the US and was competing in the nation’s premier conferences. Babcock was extremely confident that they would be able to identify and hire a new head coach who could build on their rich history and get back to their winning ways.

During his press conference following a loss to Syracuse, Justin Fuente was asked about his job security. The Virginia Tech head coach snapped back and said that the only thing on his mind is trying to help his team win football games.

He stated that he was not worried about such a thing but what mattered the most was to give these guys a chance to win. He added that they had a chance to control their attitude and efforts and the athletes were incredible at maintaining such things.

Prior to taking over the Virginia Tech program, Justin Fuente spent four seasons as the head coach at Memphis. Under his leadership, the Tigers went from being a below-average team to winning 10 games in 2014 and nine games in 2015. His record with Memphis was 26-23, but it was 19-6 over his last two years with the team.

Kevin Durant Got Anxious About Moving On From Net Drama, Rumors Were Inaccurate

Kevin Durant claimed that "a lot of s-t" in the media coverage of his summer contract extension was incorrect. But before changing his mind,...

Kevin Love, Draymond Green and LeBron James Together To Buy A Pickleball Team

It's true what you read there in headline. NBA sensation LeBron James is adding baseball to his growing list of sporting endeavours, making this...

We will detail these new chances in order to make you aware of the advantages that are offered in your state as October approaches...

Putin Once Told Trump In Half Jest That Israel Should Be Named After The...

The political journalist has painted a sober and cool look at the cartoonishly chaotic nature of Trump at the White House and how his...

Donald Trump Escapes Rape Case For Now After Court Accepts He Qualifies As US...

Donald Trump might get away with writer E. Jean Carroll's defamation suit thanks to the broad protections that federal employees and officials enjoy in...