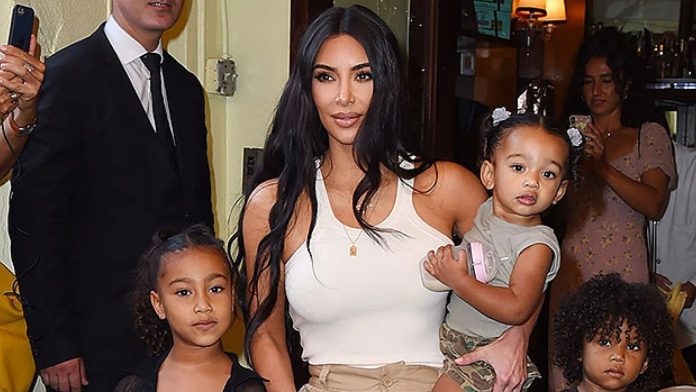 Kim Kardashian has talked about the children she birthed with her former partner Kanye West. The show’s star, Kardashians, shared how she opened her eyes on the bed’s right side to realize two of her daughters, 9 years old North and 4 1/2 years old Chicago sleeping nose to nose.

Kim Kardashian Can’t Get Enough Of Being A Parent

The star raved about her parenthood, as she showed her fans the picture of the two daughters sleeping while their noses touched on Instagram.

The mother, in fact, has recently celebrated the 9th birthday of her daughter North last month in the wild, camping with her friends. Kim has also organized a special effect makeup class with the children. She shares the incident on a TV show.

Kim Kardashian has previously told her followers via People Magazine how she enjoys the company of her children around her. She shared how she ‘recharges’ herself as she finds it rare to open her door and lock it behind her, saying she needs twenty minutes since someone or the other is always looking for her.

The Kardashian star has shared how she gets up at 5:30 and has her workout sessions before her kids get up at 7:05 AM. However, the proud mom has also said that chaos is beauty, which is why she loves to wake up before her kids to have an hour.

Kim Kardashian has been recently spotted holding hands with Pete Davidson, 28, which kind of puts a seal on her being romantically connected with Pete. A source from People has also said Pete is slowly getting to know her four children. “Kim trusts Pete with her kids. He is starting to spend time with them without her. She wants her kids to bond with Pete.” As per the insider.