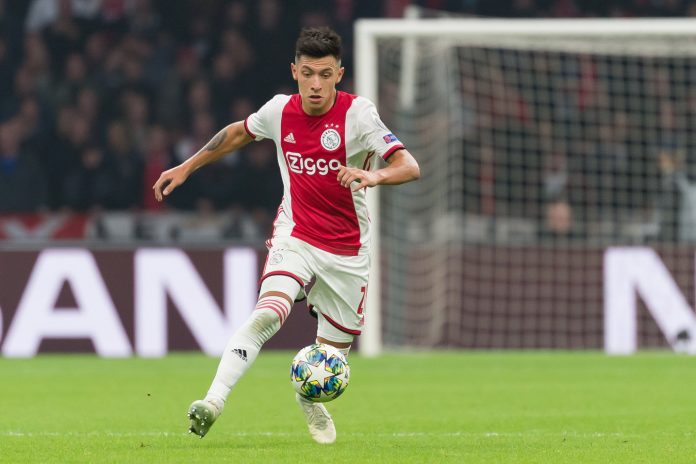 Lisandro Martinez is one of the biggest sensations in the footballing world at the moment. The footballer currently plays his club football for the Dutch giants, Ajax Amsterdam. He has displayed red hot form in the previous season which has attracted many top-level clubs towards him. Martinez played a major role in the success of Ajax in recent years. His heroics have bailed out the team on numerous occasions. Lisandro has been often termed as the Best Defender of the league by experts.

Several clubs have shown interest in him for the upcoming season. However, the most prominent of them has been Arsenal. The Gunners are very much keen on signing the talented defender to bolster their defensive outlay. Arsenal has always been a team that has flattered to deceive. The Gunners were never short of talented players. However, the consistency of the team has come back to haunt them dearly. The story of the current season was also the same. One of the biggest areas of concern was the defensive structure. Arsenal looked vulnerable while encountering a quality attack. Thus, to mend the gaps, they are going all out to sign Lisandro Martinez. Let us learn more about the story in detail below.

Lisandro Martinez might well be playing in the English Premier League next season. Arsenal is not looking to give up on the defender even after being rejected once. The Gunners made a €30 million offer for the star earlier this season. However, the bid was cited as too low by the Ajax Amsterdam management.

However, without giving up faith, the team management of Arsenal has once again offered a €40 million bid for Lisandro Martnez recently. Although the estimate provided by Ajax was €50 million, it remains to be seen which way the story goes.

Dean Winters Down With Pain

Stimulus Check: Here’s How To Use Your Money

Faraday Future Intelligent Electric (FFIE) exchanged 224919 shares on hands in most recent trading session and observed an average volume with...

Apple (AAPL) exchanged 862478 shares on hands in most recent trading session and observed an average volume with 84843.01K shares. The...

Is this stock is Attractive? XPeng (XPEV)

XPeng (XPEV) exchanged 215816 shares on hands in most recent trading session and observed an average volume with 10647.07K shares. The...

AeroClean Technologies, (AERC) acknowledged active focus on shares in the last trading session.The stock disclosed a change of -11.42% and its...

Are You looking For Hot Stock? Boxed, (BOXD)

VOLATILITY ANALYSIS: Volatility remained at 8.87% over last week and shows 11.95% volatility in last month. VOLATILITY is also measured by...