Footage of Marjorie Taylor Greene, the United States Representative, got viral recently. In the video, the politician can be seen and heard encouraging the people to avoid taking the coronavirus vaccines. The incident is from the state of Alabama. The Republican extremist told the people that they should drive away any officials who tell them to get vaccinated. She also stated that they should do that with guns in their hands.

Marjorie Taylor Greene stated that as per facts, the state of Alabama came under the unvaccinated zones in the country so they might expect vaccine visitors very soon. She referred to the people of Alabama as the “lucky” ones. The Republican continued that President Joe Biden might be sending his official representatives to the state in order to have a conversation with the people.

According to her, the representative would come knocking on the doors of the Alabama residents. And then they would gather all personal information from the people like their names, the names of all the family members, addresses, all forms of contact numbers including the social security number. Marjorie Taylor Greene suggested that lastly, they would ask if they are vaccinated yet or not.

Marjorie Taylor Greene told the people to not say a word to them as the government officials are already equipped with the required information. Conspiracy theories like these have been heard all over the country. All of these theories have been promulgated by the extremist leaders belonging to the Republican Party. Madison Cawthorn, a politician from the state of North Carolina, gave the suggestion that these kinds of actions would lead to the confiscation of bibles and guns.

AEW All Out 2021: The Real Winners And Losers

Trump says in his mother’s eyes, he ‘could do no wrong’

VOLATILITY ANALYSIS: Volatility remained at 20.01% over last week and shows 16.32% volatility in last month. Market risk that established with...

Cosmos Holdings (COSM) exchanged 11680696 shares on hands in most recent trading session and observed an average volume with -0.1424K shares.... 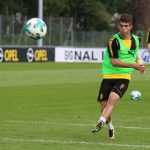