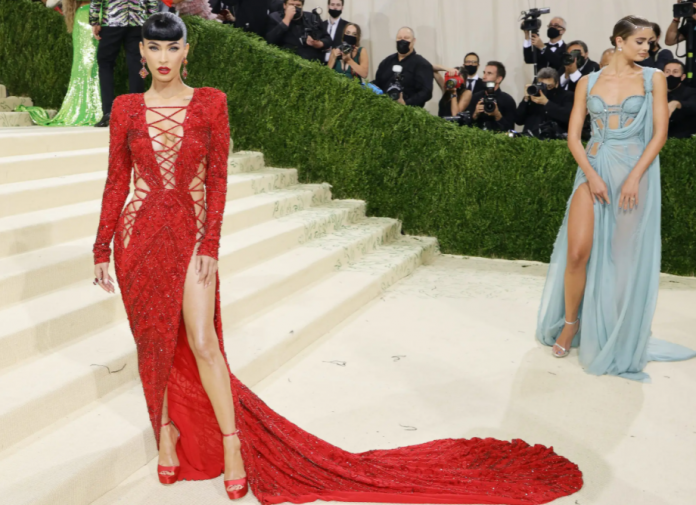 Megan Fox, 35, attended the Met Gala at the Metropolitan Museum of Art in New York City by herself on Monday, September 13. She wore a stunning red Dundas dress with lace-up detailing.

The event came a day after her boyfriend, MGK, 31, almost got into a fight with UFC champion Conor McGregor on the red carpet at the VMAs. The fight began when Conor asked MGK for a photo, but the rapper refused, claimed TMZ. A source informed Variety that Conor tried to approach MGK, who was in line for red carpet photos. Conor was pushed back by the rapper’s security. The magazine also said that Conor, who was walking with a cane due to a recent injury in a fight, fell back and dropped his cane.

The same source also claimed that Conor threw his drink and yelled something similar to “that fucking punk punched me” before attempting to take a swing at MGK.

In an interview with Entertainment Tonight post-VMAs, Conor denied that he tried to start a fight with MGK.

Conor said that MGK showed up and he does not know who he is except for the fact that he is a rapper who is dating Megan Fox. He said nothing happened between then and he only fights real, experienced fighters and he certainly does not fight “little vanilla boy rappers”

In an interview with Variety, MGK refused to comment on the fight between him and Conor and covered the interviewer’s mic. Megan said that they are not allowed to speak of it.

Megan Fox and MGK have been dating since 2020 after meeting on the set of their film, Midnight in the Switchgrass. Back then, Megan was separated from her then-husband, Brian Austin Green. The former couple, who had tied the knot in 2010, share three sons Noah, 8, Bodhi, 7, and Journey, 4. Following their separation, Megan officially filed for divorce in November 2020 after 10 years of marriage.

Since then the Transformers star and her rapper lover have been pretty much inseparable. At the 2021 MTV Video Music Awards, which took place a day prior to the Met Gala in New York, Megan affectionately introduced MGK’s performance of his new single “Papercuts” together with friend Kourtney Kardashian, whose boyfriend Travis Barker collaborated with MGK on the song. Megan asked the New York audience to get extra loud for their future baby daddies.

The Most Highlighting Advanced Attributes Of Bitcoin This Year