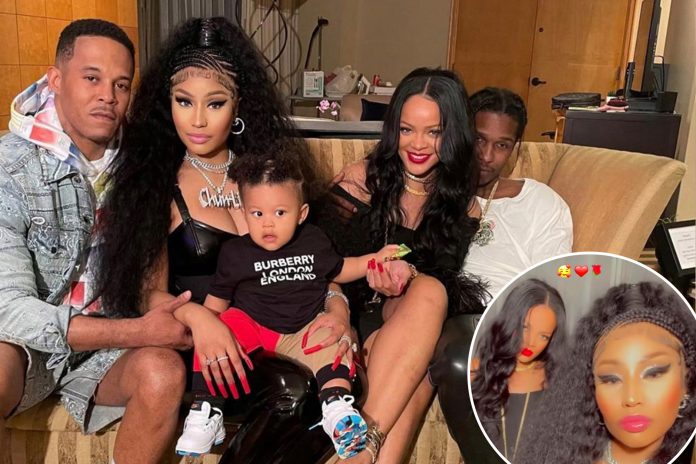 Nicki Minaj was seen spending time with her family and friends, that included her husband, Kenneth, her son, and her friends included Rihanna and A$AP Rocky.

The rapper uploaded some pictures on Instagram which showed a glimpse of how they spent their time. Nicki Minaj was seen posing for the camera along with Rihanna in a selfie video.

She captioned the picture and wrote about her Caribbean descent and was also posing with Rihanna’s niece, Majesty in the next video clip. Rihanna entered the frame too and captured both of them in her phone.

Before posting these video clips she shared 2 pictures while posing on the couch with Petty, Rocky, and Rihanna. Their child was on Minaj’s lap with a black t-shirt on.

Minaj shared several photos on Sunday from the same event but did not mention Rocky and Rihanna on them.

She also added 3 photos of herself posing in front of the camera wearing the tight black outfit and posted a dance video at the end.

She captioned the video, swipe to receive a surprise.

Rihanna and Nicki Minaj were last seen in the “Fly” video, which was in 2011. The song belonged to the album “Pink Friday”.

Nicki Minaj is working on a documentary and so is Rihanna. Rocky was recently seen in the Rolling Loud- Miami event and Petty was last seen in Nicki’s video “Megatron”.

Over 600,000 Americans Still Entitled To The Third Stimulus Check

Chandon Sullivan Has Signed For The Vikings