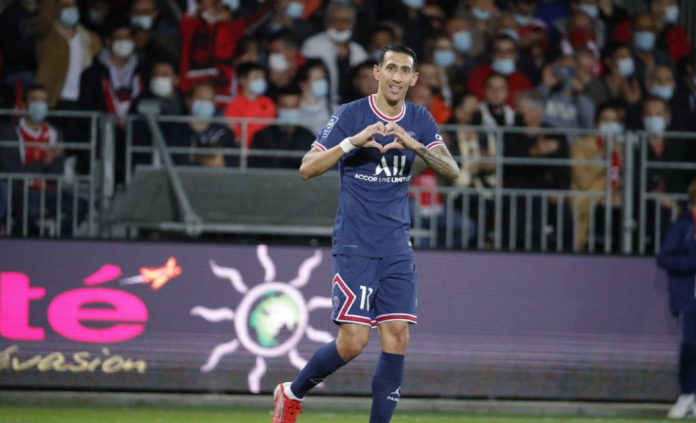 The French wonderboy, Kylian Mbappe had scored a sublime header against Brest, to help PSG win 4-2 on Friday. He helped the team push up to the top of Ligue 1, winning 9 points from 3 games.

PSG VS Brest: Top Moments From The Game

Ander Herrera scored the first goal for PSG in the 23rd minute and Mbappe had made it 2 before the 36th minute. He scored a beautiful goal past Marco Bizot, the goalie from Brest,  from 10 meters away after he caught on a rebound off Wijnaldum’s shot.

PSG are showing their attacking talents after scoring ten goals in 3 games and now Lionel Messi is waiting for his turn. Mauricio Pochettino has stated that he needs to work on his team, even more now, as he needs to get his talented players to count.

Mauricio has a unit filled with superstars but is facing the challenge of making them work together as a team. He wants to gel them together so that everyone can serve each other.

The PSG manager feels that it is quite difficult to do so and the team had struggled in the game, in the dying minutes. He was quite happy to get full 3 points from a good team.

Brest had seen Franck Honorat score one after 42 minutes, which was set up by Romain Faivre with a back-heel.

Idrissa Gueye had scored a screamer for PSG in the 73rd minute when he shot the ball from 35 meters and beat the goalie at his near post.

Brest had missed a couple of chances on the way, till Mounie scored on in the 85th minute.

PSG scored the winner after Angel Di Maria lobbed the goalkeeper from the edge of the box and the Parisians in the gallery went crazy.

Messi was announced in front of the PSG fans but has not played a game as of yet. He was not in the squad for the last 2 games and is just returning to the camp after taking a month off, after winning the Copa America with Argentina.

Comcast Corporation (CMCSA) exchanged 54129255 shares on hands in most recent trading session and observed an average volume with 24271.15K shares. The...

Dave (DAVE) acknowledged active focus on shares in the last trading session.The stock disclosed a change of -4.15% and its listed...

Should You Observe this stock? Southwestern Energy Company (SWN)