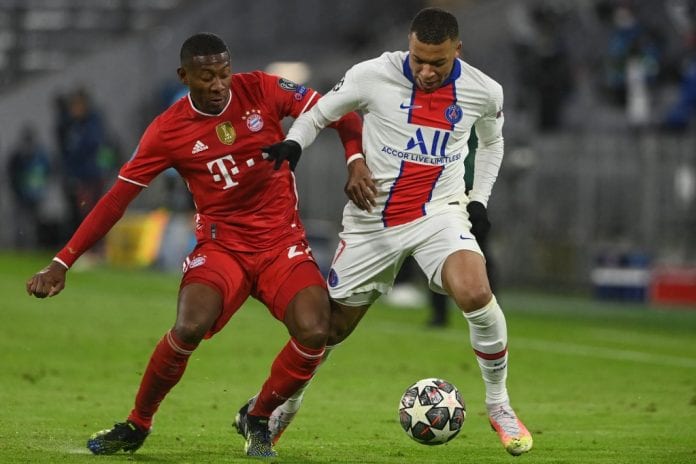 The first leg of the quarter-final tie of PSG v Bayern in the Champion’s League ended with a stunning win for the Parisians. Kylian Mbappe drove the team in their 3-2 victory over Bayern Munich at the Allianz Arena.

Bayern maintained their red waves while pressing high, which is a trademark of Hansi Flick’s playstyle. By the end of the match, Bayern had recorded an astounding 31 attempts on goal. However, the result in the PSG v Bayern tie indicated the clinical nature of Mbappe’s off-the-ball movement and Neymar’s passing.

The 3-2 scoreline in PSG v Bayern marked the Bavarian team’s second loss in as many as 29 matches in the UCL. However, PSG will not have completed their revenge for the previous season’s final match until the second leg is played out in Paris. As far as the night went, the job is nowhere near being completed as Bayern dearly missed their clinical Robert Lewandowski to convert the host of chances.

Bayern’s home ground was covered in snow and temperatures were extremely low for PSG v Bayern. However, PSG brought the heat within two minutes by taking the lead through a combination of Angel Di Maria, Neymar, and Mbappe as the one to finish. Neuer blocked the straight shot but could not keep it out.

Both the sides piled on pressure fearlessly with their 4-2-3-1 lineups even after the goal. Keylor Navas had to pull out all the stops to stop a shot from close range by Leon Goretzka and then Josh Kimmich’s vicious drive.

However, PSG scored the second goal at the 28-minute mark in almost the same style as the first, except this time Bayern conceded after the initial charge by Mbappe. Bayern then scored their first almost immediately afterward through Choupo-Moting. Thomas Muller equalized for Bayern on the hour mark. In the end, however, a dazzling run from Mbappe settled the score.

Belgium Is Hungry For Revenge Against France In The Nations League

Benefits of having Engineered Wood Flooring

Would you spend $40,000 on the #Olympics? This superfan from Japan did

Many Americans Are Eligible For Stimulus Check Worth 1400 dollars: Check If You Are...