Home Politics 2022 Midterms: Biden Goes All Out Against Trump And MAGA Republicans 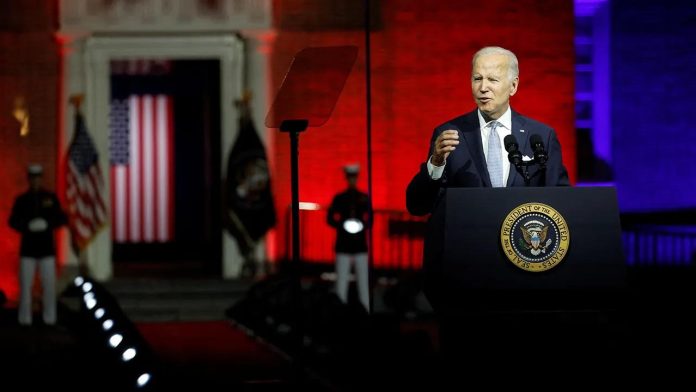 As the battle for the 2022 midterms hots up, President Biden is very much in danger of losing the Senate and House come November. But the Democrats are daring to hope they can close in on the Republicans and limit the damage. Biden has termed Trump as an extreme threat to the foundation of the nation and has changed his style by going all out at him.

In every campaign, he has gone all out against the Republicans. At one campaign in the 2022 midterms, he has alleged that the Republicans assume that there can be only two outcomes, either they win or they are cheated. He said that was the only position that Trump and his band of MAGA Republicans hold today.

The Republicans have hit back through Kevin McCarthy. Just outside Biden’s hometown of Scranton, Pennsylvania, the Republican House minority leader pointedly criticized the President. He alleged that Biden’s policies have severely wounded America’s soul betrayed its trust and diminished the American spirit.

Biden has been keen to distinguish between Trump and the MAGA Republicans loyal to Trump on one side and the mainstream Republicans who don’t necessarily adhere to suggestions that the 2020 elections were rigged.

The Democrats strongly believe that democracy is at stake and they have been clamoring for this for a while for the President to be much more forceful and direct and call out the forces that they feel are proving to be a threat to the governance and the nation.

Democrats are much more energized before the 2022 midterms by this forceful assertion by Biden. They have been wanting for some time to see a more pointed broadside from their leader.

What remains worrying for politics in America is that even the ignominy of fomenting an insurrection has not dented Trump’s hold over the electorate ahead of the 2022 midterms. The power of his falsehood still rules over great swathes of the country.