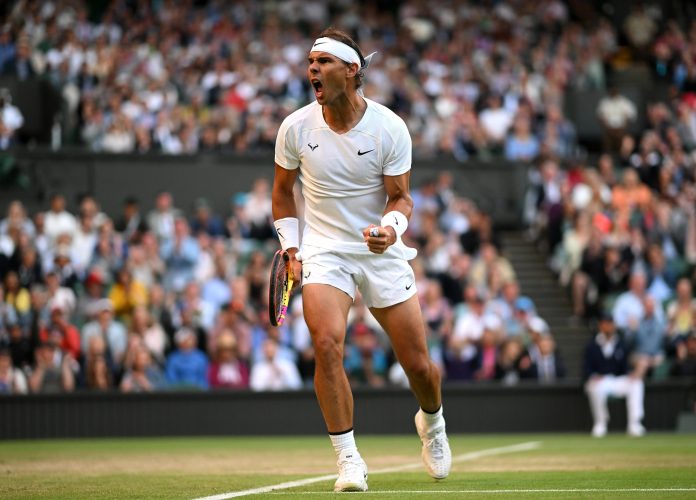 Rafael Nadal leaped forward by finalizing his spot in the Wimbledon men’s quarterfinals after winning against the dutchmen Botic Van De Zandschulp.

The match against Botic Van De Zandschulp had some interesting jitters in between as Van De Zandschulp managed to mount some resistance for Rafael Nadal in the 3rd set making Rafael fail to convert the match points while leading 6-3. Nevertheless, Rafael Nadal easily converted his 4th match point to a 6-4, 6-2, 7-6 (6) and clenched his victory, keeping the chance for a grand slam in a calendar year alive and up to his own performances. After winning Rafael Nadal said

“To be in the quarterfinals here at Wimbledon after three years without playing here, it’s amazing for me,” he expressed his joy and added, “So very, very happy.”

Meanwhile, Nick Kyrgios defeated Brandon Nakashima in the fourth set battle, which was quite intense with a score of 4-6, 6-4, 7-6 (2), 3-6, 6-2. Nick needed medical attention a few times because of his troubled shoulder still he reached a fantastic lead of 5-1. By the time the match ended, Kyrgios had scored 35 aces while making his way back to Wimbledon for the first time after his debut.

“I was able to just say, ‘Wow, look how far I’ve come,’ to myself. I was bouncing the ball before I served; I really just smiled to myself, I was like, ‘We’re here, we’re competing at Wimbledon, putting in a good performance mentally.’ It was rewarding,” Said Nick Kyrgios.