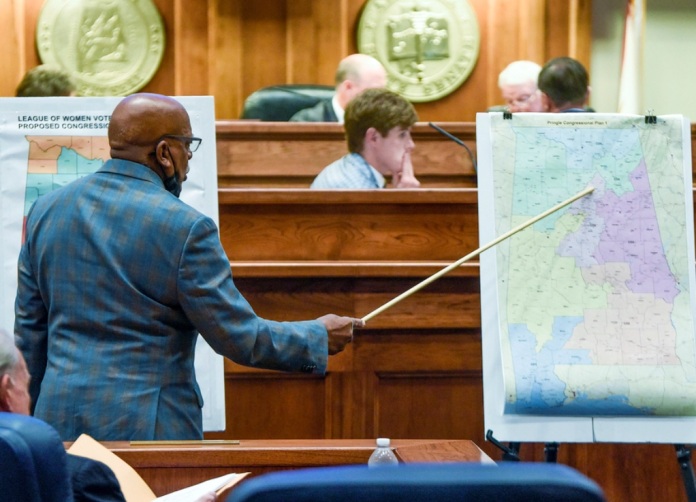 The Supreme Court reinstated the Republican-drawn Alabama Congressional map on Monday. Earlier, a 3 member federal lower court had ruled that the map violated the Voting Rights Act. The Supreme Court ruling comes after Alabama filed an emergency plea by the state that had challenged a decision by a 3-judge federal court this January.

The court panel that ruled against the Alabama Congressional map had two judges chosen by Donald Trump. The panel ruled that the Voting Rights Act stipulated that a state having a Black population of over 25% should have 2 districts that had a majority Black population.

The seven redrawn districts in the Alabama Congressional map have only one district with a Black voter majority despite the state having a strong African-American population.

The final decision, in this case, is expected to have considerable repercussions for the voting act. This could possibly erode further the reach of the legislature.

Earlier the Supreme Court had effectively struck down the heart of the 1965 Voting Rights Act, setting free 9 southern states to change election laws without federal consent.

In a rare move, dissenting Judge Ruth Bader Ginsburg summarized her dissent and said that the legacy of Dr. Martin Luther King Jr. and the nation’s commitment to justice had been undone and dis-served by the decision of the Supreme Court.

Justice Ginsburg spoke about ‘second-generation barriers such as laws requiring at-large voting in places with the Black majority and racial gerrymandering as a 2nd-generation way to deny equal opportunity to minority candidates and voters.

Three judges along with Chief Justice John Roberts were the dissenting members: Justices Elena Kagan, Stephen Breyer, and Sonia Sotomayor. They decided to favor the midterm elections of 2022 to take place according to the Alabama Congressional map approved by the lower court.

Concurring with the dissenting opinion, Justice Kavanaugh and Samuel Alito opined that the court’s decision is vital to put a stop to substantial alterations to voting law nearing an election, and that is exactly what is taking place with the revised Alabama  Congressional Map.

Kang Makes His Debut In MCU

SHF Holdings, (SHFS) acknowledged active focus on shares in the last trading session.The stock disclosed a change of 43.17% and its...

VOLATILITY ANALYSIS: Volatility remained at 36.27% over last week and shows 22.72% volatility in last month. VOLATILITY is also measured by...

Are You Looking For Active Stock? Verastem, (VSTM)

Verastem, (VSTM) observed an average volume with 1308.26K shares and exchanged 106355 shares on hands in most recent trading session. ...

Are You Looking For Active Stock? AeroClean Technologies, (AERC)

Dave (DAVE) exchanged 356697 shares on hands in most recent trading session and observed an average volume with 6131.88K shares. The...