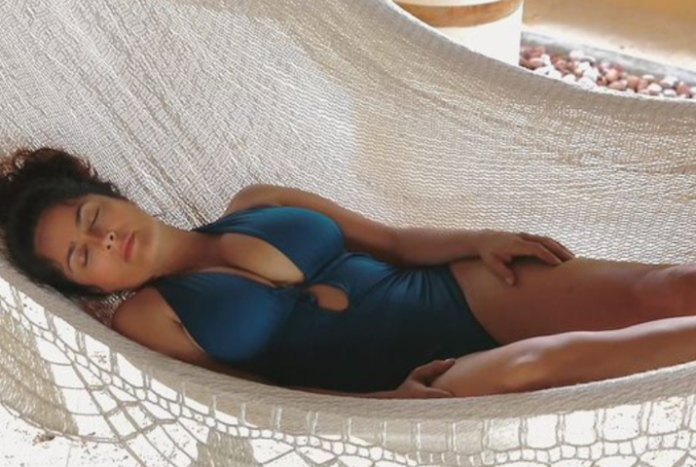 Salma Hayek dazzles whatever the occasion or the season. Be it winter or summer, formal outfits, or swimwear, she knows how to pull them off and captivate millions of her followers on Instagram. It has been a busy 2 months as Salma Hayek went on a whirlwind global tour for House Of Gucci and Eternals.

There was also the Walk Of Fame star at Hollywood for the bilingual actress. She also had a ceremony where she received the love and affection of her friends.

After her hectic schedule, Salma deserved her share of relaxation. This Monday, the star posted a photo for her fans, showing her taking some time off for herself after the double movie promotion.

Hayek can be seen in a revealing Peacock blue swimsuit, having a  ‘hammock siesta’ in a large white hammock. With a keyhole cut and an enticing plunging halter neckline.

Salma is known for surprising fans with her stunning pictures in swimsuits. She expectedly garnered gushing comments where she is hailed as a ‘sleeping beauty’ and a ‘goddess.’

Salma Hayek had earlier revealed that she had no qualms in posting pictures wearing revealing swimwear. She even joked that people were tired of seeing Salma Hayek so often wearing a bikini.

At 55, the Mexican superstar isn’t shy about accepting her age, or embracing her body. She revealed that she is excited about her age and called it an achievement.

Her fans went crazy at the picture, and she had generated 700,000 likes within a few hours along with matching compliments. Fans gushed about the beauty that went along with her incredible success.

Adam Sandler, who accompanied Salma Hayek to the Walk of Fame event, said that she remained one of the best actresses of our generation. He also spoke of their friendship that that bound them together since they worked together.