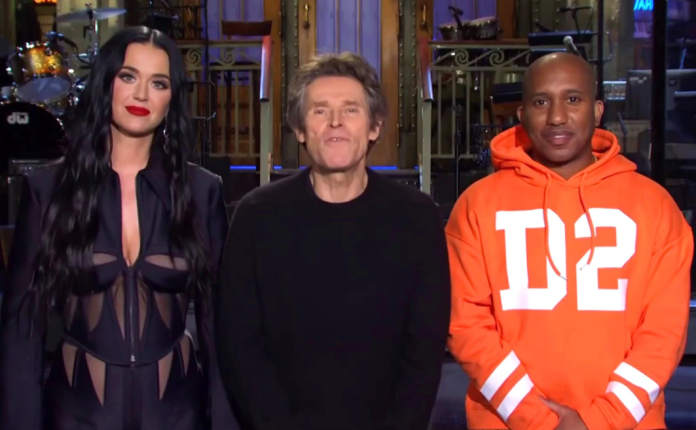 Willem Dafoe tonight made his debut as host of SNL, speaking in his opening monologue to his excitement in returning to New York, where his career as an actor began.

“I moved here when I was 21, had no money, and rented an apartment on 10th and Avenue A for 200 bucks a month, and that’s where I learned how to act,” said the four-time Oscar nominee. “For example, I had to act like I enjoyed having a bathtub in my kitchen.”

Dafoe recalled, in the SNL episode, that he got his start in experimental theater, as an original member of The Wooster Group. “That background really taught me how to throw myself into a role,” he said. “Some people tell me that my acting is over the top, but to me, one man’s over-the-top is another man’s engaged performance.”

Dafoe later spoke to the fact that he has “an expressive face” that he “can’t control,” which has contributed to so many of his iconic roles. “I don’t think about controlling it. I’m not one of those subtle actors like Nicolas Cage or Al Pacino. Maybe that’s why people come up to me and say, ‘You know what role you’d be perfect for? The Joker,’” he deadpanned. “Always nice to hear that you’ve got the vibe of a sociopath.”

Dafoe thanked SNL‘s live audience for coming out in the midst of a snowstorm and was transitioning to speak about his childhood in Appleton, Wisconsin when he was interrupted by a preppy-looking couple, played by Aidy Bryant and Mikey Day.

“You’re never going to believe this,” said Bryant, “but we’re from Appleton, Wisconsin, too.”

“That’s nice,” said Dafoe. “You came here to support one of your own.”

“Uh, no, no. We got tickets from the lottery,” admitted Day.

“Yeah, had no idea you were hosting, but we’re huge fans. We’ve seen all of your Spider-Man movies,” said Bryant. “Spider-Man, Spider-Man 2, Spider-Man: The New One.”

Dafoe kindly let the couple know that he has done films outside of the Marvel canon, then having to inform them that he was in neither Full Metal Jacket nor The Passion of the Christ, as they believed. (He was in Platoon and The Last Temptation of Christ, for the record.)

No Way Home Not Considered For The Oscars

Why automation is a ‘critical tool’ for small businesses’ ability to compete: Zapier CEO