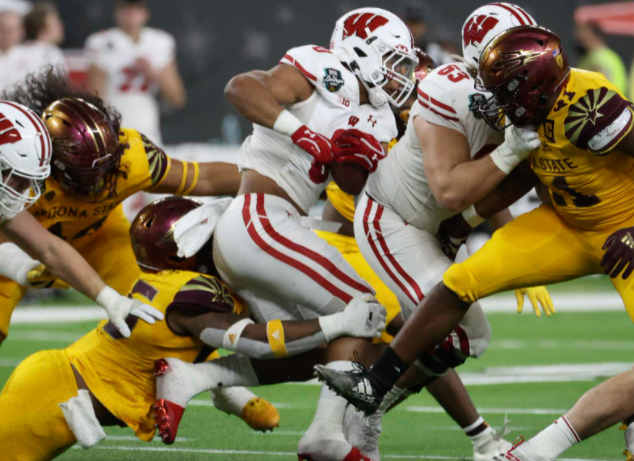 Braelon Allen managed to run for 159 yards when Wisconsin drained the final 9 minutes and 57 seconds off the clock with an 18-play drive that sealed a 20-13 victory over Arizona State in the Las Vegas Bowl on Thursday night.

Allen is a true freshman from Fond Du Lac, Wisconsin, who had 101 yards by halftime for his eighth 100-yard game of the season. He averaged 6.8 yards carrying this year, falling just short of joining NFL stars Melvin Gordon and Jonathan Taylor as the only Wisconsin running backs to average 7 yards per attempt over a full season.

“Being able to have the season that I ended up having, I can’t thank the guys enough for the support,” said Allen, who selected the game’s MVP. “Keeping my head on straight and keep on encouraging me, just telling me my time was going to come. All the credit goes to the O-line and all the guys in the room.”

Graham Mertz finished 11 of 15 for 137 yards and a 7-yard touchdown toss late in the first quarter to senior tight end Jake Ferguson, who caught three passes for 33 yards for Wisconsin (9-4).

“Really proud of this group,” Badgers coach Paul Chryst said. “Took a lot of guys to get us that victory. It’s really what this season’s been. It’s a special team.”

The Badgers started 1/3 with Big Ten losses to ranked opponents Penn State and Michigan but answered with a seven-game winning streak to earn a 20th consecutive bowl bid.

“It was all of us just coming together, trusting each other, being confident in our prep, and taking that extra step to perfect what we were doing,” Allen said.

Clinging to a seven-point lead, the Badgers took over at their own 3 with just under 10 minutes remaining and drove 90 yards to run out the clock in the first bowl game at Allegiant Stadium, home of the NFL’s Las Vegas Raiders.

Furniture Company RH (NYSE: RH) Is In For Some Big Gains After Trump’s Trade...