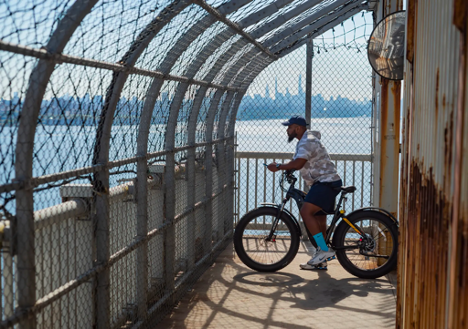 The George Washington Bridge in New York is certainly not part of the list of the most iconic landmarks in the city. Another more famous bridge occupies a spot on that list; Brooklyn Bridge. While the former may not be as popular for photographers, it does serve a lot of utility for the city. The bridge connects the borough of Manhattan with the New Jersey borough of Fort Lee and is the world’s busiest motor vehicle bridge. The George Washington bridge also contains two sidewalks that can be used by pedestrians and bicyclists.

Lately, these sidewalks have increased in traffic due to an unlikely reason. The part of the bridge which extends into New Jersey has become a gathering place for punters and players seeking out the range of options and action offered in New Jersey online casinos.

It’s a puzzling phenomenon for bypassers. Typically, people use the noisy bridge for passage and nothing else. Nowadays you have people parked on their bikes, vespas, and scooters, staring at their phones for long periods of time. But you won’t see them at the foot of the bridge on the Manhattan side, it’s only as you start passing over to the New Jersey side that you encounter these online casino players. The reason is location and legislation. While New Yorkers can entertain themselves with sports betting online as of January 2022, they cannot legally play in online casinos. To do that, they have to go over to New Jersey.

How New Yorkers have been bypassing online gambling restrictions

The way it works is that each mobile device has geolocation that tracks where a person is. Geolocation is used by almost all mobile apps and dictates what rights you have as a user. If we take the example of Instagram, some geolocation does not have the right to play Instagram Music, meaning that the sound is blocked for a lot of the content available in the app. Once you would move out such as geolocation, you’d be able to access content with the sound available. Similarly, the online casino mobile apps can recognize if a user is in New York where the service is not available, or if the user is in New Jersey where the service is available. What happens is, that you have a person in New York crossing the bridge. As soon as the person’s phone’s location is locked into the New Jersey borough of Fort Lee, the user can access New Jersey online casinos and play legally even though they may reside in New York.

The George Washington Bridge’s role as a hotbed for online casino players may be numbered. Earlier this year, the state of New York legalized online sports betting by allowing operators to offer bookmaker services online. Joseph P. Addabbo Jr., the chairman of the New York State Senate committee on racing, wagering and gaming was one of the biggest voices for changing New York’s laws. “It gives me agita,” Addabbo told the New York Times. “That’s our money that’s going over that bridge. Money that should be going to New York’s education system is going to New Jersey. It burns me up.” For the very same reason, money crossing the bridge, we will likely see a legislative change that also covers online casinos. Where it will be possible for online casinos to legally offer games and wagering to New Yorkers. This could become a reality in the near future as a new bill was submitted to the state’s Assembly.

New Jersey may suffer some losses in tax revenue if the New York online casino bill is passed. On the other hand, New York areas that have taken advantage of the George Washington Bridge will provide well-needed tax revenues for the state of New York.

In the United States, gambling has always been a hot button issue and is often limited to certain areas. As of last year, this started to change and we are seeing more and more states opening up the doors for legalized online gambling.

PG Has Seen Immense Growth In Its Short Interest

Stimulus Check 2022: Will You Receive Another Check?

Andrew Yang Is No More A Democrat