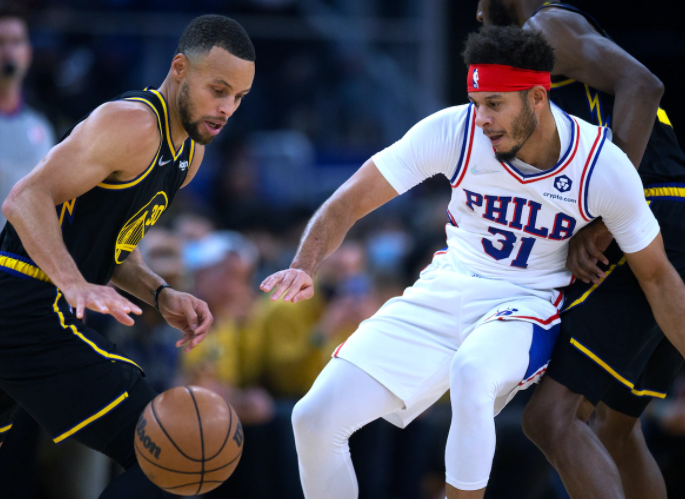 Steph Curry scored the last 3 points of the Warrior’s comeback win against the Philadelphia 76ers, 116-96. He scored the points with only 1 minute and 27 seconds left on the clock.

The score was well out of reach for the Sixers, but the Warriors’ star didn’t realize what his sixth 3-pointer of the night really meant.

Until then, his younger brother and 76ers guard Seth Curry had outscored him by exactly 2 points.

Steph Curry Had No Idea That He Had Outscored His Brother

Steph Curry spoke to the reporters that he didn’t know about this fact, which was later reminded to him by his brother. He clearly had no idea that the stakes were quite high on that last shot.

Steph ended the game with 25 points, the highest in the game. Seth was the game’s second-leading scorer with 24 points to his name, which is his second-highest scoring night this season.

Steph Curry seemed to be happy with the fact that the Warriors improved to an NBA-best 16-2 with the win over the 76ers, but was proud and praised his younger brother for the game.

Following the game, Steph Curry posted a picture of him, Seth, and Warriors guard Damion Lee, who was married to Steph and Seth’s sister Sydel and added the caption “Family things! Happy Thanksgiving.”

Stimulus Check Payments And Letter 6475 Sent By The IRS

Fresh Round Of Stimulus Checks For Millions In October

The Update Of A Fourth Stimulus Check- Economic Condition Could Detoriate

Marathon Digital Holdings, (MARA) acknowledged active focus on shares in the last trading session.The stock disclosed a change of 0.68% and...

Should You Observe this stock? Vale S.A. (VALE)

VOLATILITY ANALYSIS: Volatility remained at 2.27% over last week and shows 2.12% volatility in last month. Market risk that established with...

You Need to See this stock? XPeng (XPEV)

Carnival Corporation & plc (CCL) traded 13470020 shares on hands in most recent trading session and observed an average volume with 48700.74K...